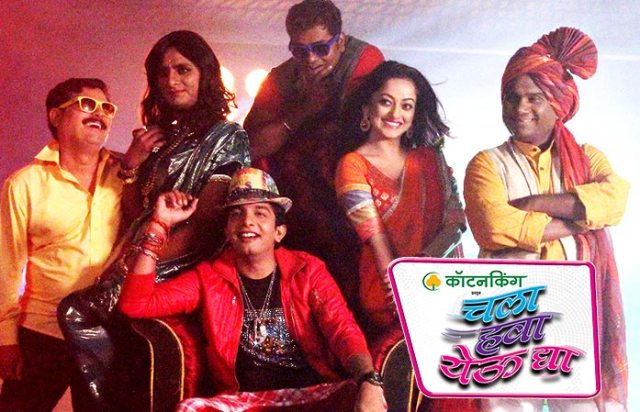 From the time Comedy Nights With Kapil became a super hit show on television, there have been many versions of it on various channels including regional channels. Next in row is one on a Marathi channel called Chal Hawa Yevu Dya . The show has a character that resembles Gutti from Comedy Nights With Kapil which is played by an accomplished comedian actor Sagar Kaarnde . Sagar plays the character of Reshma who is similar to Gutti in appearance and portrayal. Although the makers of the serial deny any copying from Comedy nights with Kapil, the resemblance is striking.

When Sagar was asked about the character he was quick to react that his Reshma is an original creation. According to him, he first played the role of Reshma on another famous Marathi comedy show named Fu Bai fu. The character became widely popular and thus the same has been recreated in a fresh way in Chal Hawa Yevu Dya. Reshma was created for the show much before Gutti came into existence. And so it is unfair to allege any copying of Gutti in Reshma played by Sagar. Gutti , played by Sunil Grover, who disappeared from Comedy Nights With Kapil is hugely popular even today.

Shahrukh Khan To Do His Cameo In Marathi Movie ‘Dhanak’