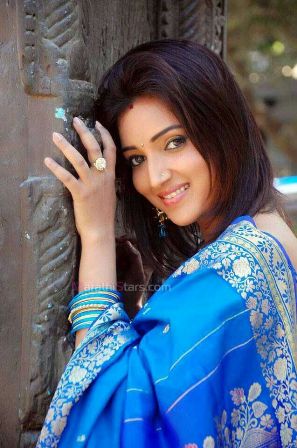 Rupali Bhosale is a popular Marathi TV and Movies actress. She is born and brought up in Mumbai on 29th December 1983. After her schooling and college from Mumbai and since her early age, she wanted to be an actress and thus was seen joining a theatre group which helped her to hone and groom her acting skills. Soon, she got the opportunity to work in small screen with the Doordarshan TV serial called Aayushmaan Bhav since then it was no looking back for her. She then did a number of other serials including Tuze Maze Jamena, Tea Time, Gane Tumche Aamche (ETV Marathi), Maherchi Sadi (ETV Marathi), Vaihinisaheb (ETV Marathi), Kulvadhu (ZEE Marathi), Kulswamini (Star Pravah), Man Udhan Varyache (Star Pravah), Don Kinaare Doghi Apan (Star Pravah), Kanyadaan (Mi Marathi), to name a few.

Besides, Rupali Bhosale did her debut over Silver Screen with a Marathi movie called Chaliichal, which is directed by Shriram Gojamgunde. As said she was also active in the theatre world hence was seen doing a number of theatres including Jago Mohan Pyare, Buddha Hoga Tera Baap, He Vaay Lagnach,   Hands up, Marathi Manase, Ha Sagari kinara, Ek Daav Premacha, ME shahrukh Manjarsubhekar and     Karun gelo gaav. Apart from the Marathi movies or TV serials, she also did some Hindi TV shows and movies as well.

The former include Kasme Waade – By Eagle Films Star Plus, Badi Door Se Aaye Hain wherein she had the Lead Role for the same and the popular serial called Taarak Mehta Ka Ooltah Chashmah wherein she had her Cameo in a character called Varsha Ghotala. She also got the chance to work in a B Town movie called Risk, which was directed by Vishram Sawant. She also did a comedy show called Badi Door Se Aaye Hai, which is among the first alien comedy show in India. Besides, she was also seen in Bojhpuri films as well.