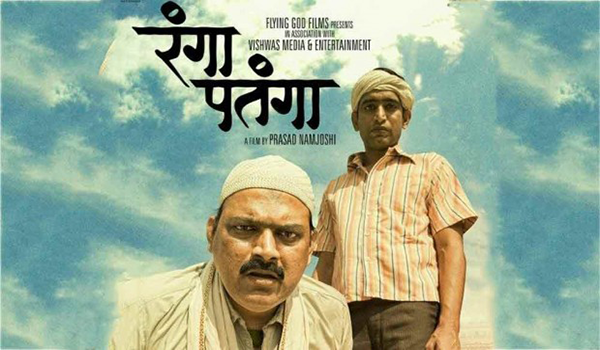 This Friday, it is a solo release for M Town as well unlike Bollywood, which comes in the form of film RangaPatanga. The film is directed by Prasad Namjoshi, while it is produced by the cinematographer turned producer called Amol Gole under the banner of Flying God Films. The film has Makarand Anaspure, Sandeep Pathak and Nandita Dhuri in the lead roles, while actors like Gauri Konge, Bharat Ganeshpure, SuhasPalshikar, Abhay Mahajan and Hardik Joshi seen in the supporting roles. The music of the film is given by Kaushal inamdar, while lyrics are given by IlahiJamadar. Now, let’s check the review of the film as under:

The film has the lead character called Jumman played by Anaspure who a farmer having lost his oxen is called Ranga and Patanga. He and his wife love the two like their own children and never can suffer the loss of the oxen. The couple tried to place a police compliant but refused by the department to register compels them to investigate on their own seeking the help of his best friend called Popat played by Pathak. Incidentally, the whole story cross path a TV journalist called Kaustubh played by Mahajan who was in the village to cover a drought. He then finds this story worthy to be covered on his channel and thus follows the Media circus. Rest is history and interesting to catch in the theatres.

The film can be called the modern day satire made against the backdrop of a rural Maharashtra. In a limited narrative, it discusses the plight of farmers and the way media mobilizes the matter of death and life conditions for their own vested interest. In other words, the film is all about the social message, but the problem with such movies is that they have to follow specific guidelines. The message of the movie requires to be properly integrated with the story and it works over the narrative following it thoroughly making a bitter end. In case if the film is seen giving up in the early stage, the audience falls in the prey of ambiguity. And this film falls in this category otherwise it is a nice film.

You can find the film scoring high in the first half, however, the humorous angle of MakrandAnaspure seems to have put behind the backburner for developing a real character. On the other side, SandipPathak playing the role of Popat (his friend) is apt. However, things die down as the media interferes the matter making it very much similar to Aamir Khan Productions’ film Peepli Live wherein the media channels goes bad to worse in their strategies to combat the TRP war without worrying about the real victims. Also, at times you can find the humor punches to be forced and completely out of context. The real issues comes into picture when Jumman is seen getting sidelined and talking about the climax bad to worse, however, with some meaningful endings, the film could gone much better.

Direction seems okay as Prasad Namjoshi has tried to make the film refreshing and alive by roping in good star cast. Though the film is seen losing its plot in the midst but somehow manages to entertain the audience to a great extent. This is purely the efforts of the director and yes the music seems to be okay and similar is the story with screenplay and other technical elements like editing and other departments.

Despite some flaws, the film cab recommended for what it has accomplished. Rather of blatant emotional appeal, or revisiting the issue of farmer suicides, it unveils up new opportunities and finds a fresh kind of approach with the given cause. The missing oxen simply like the fame Macguffin as it is not really vital what happens to them, however, this is more due to their absence. The movie simply remains very much entertaining and thus keeps the audience keen in the fate of the individuals. The format of the melodrama in the movie is often used in similar sequences and keeps the stories very much personal without actually drawing much of the attention to the big film. The film simply avoids that kind of trap and it very much successful in showcasing a larger reality.