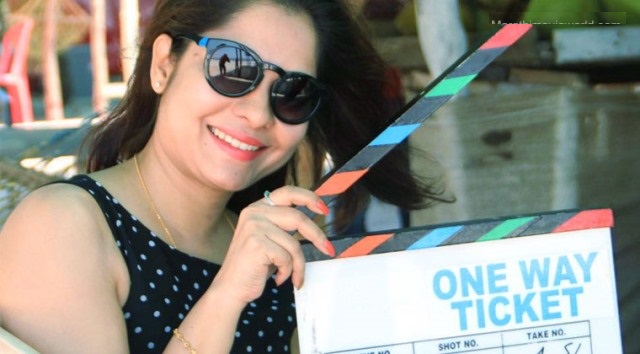 The upcoming Marathi film – ‘One Way Ticket’ of Amol Shetge is constantly in the Marathi movie reports. Interestingly, this time, the film is being discussed for its producer. The lady – Kolam Ramakant Unawane who is producing this film is a software engineer but the passion for films and made her reach to the Tinsel Town. Last year with the help of her brand Mekbrand, which was co-sponsored the Fashion show of Manali Jagtap seeking the help of a charity organization called Umeed. She soon become the co-producer of the said Marathi movie – One Way Ticket. Earlier, this film was supposed to be produced and directed by the B Town filmmaker Kamal Nathani, however, with Komal’s passion in films made her invest in her debut venture.

So, when the first look of the film was launched, Komal came into the light of the media, which was recently launched. She was then introduced as one of the youngest producer of a Marathi film to the media persons along with the other producer Suresh Pai and director Amol Shetge. The film has Sachit Patil, Amruta Khanvilkar, Gashmeer Mahajani, Sashank Ketkar and Neha Mahajan in the lead roles. Though talking about her entry into filmmaking, Komal was seen keen to do something in the film industry. So, she discussed about her decision, she was fully supported by her family members. She said that when she saw the script, she was fascinated for the foreign locations and hence thought of investing in it. She said, it was her love for Marathi films that made her to tie the shoes of a producer in M Town. The film is releasing on 10th June 2016.