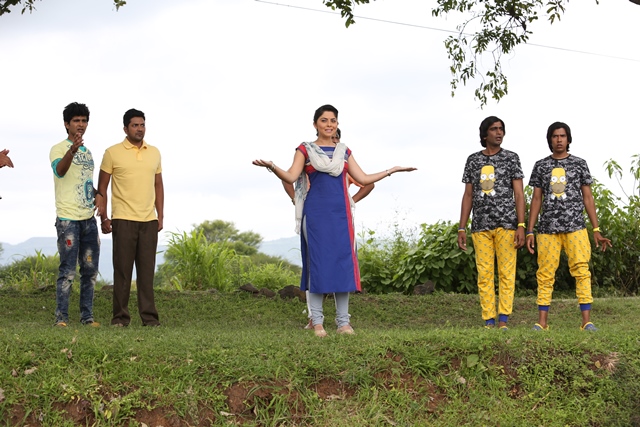 To make any type of film we need to cross many hurdles. Budget is the crux of any film and if something comes up during the shooting time then it’s a havoc. Poshter girl team came across such a problem that was rains. In the entire shooting process the rain did not stop. The team successfully completed the shooting in spite of the rains. When asked about the experience to the director he told us, “We shoot the film like a one day match where to score was too high and the overs were too less”

This might sound funny but for the producers of this film it was a real big worry. But because of the fabulous and sporty cast the film The lead of the film the Poshter Girl Sonalee Kulkarni, Hemant Dhome, Aniket Vishwasrao, Siddharth Menon, Jitendra Joshi, Akshay Tanksale, Hrishikesh Joshi, Sandeep Pathak and director Sameer Patil have nice battled the rain issues and completed the film.

Amitraj gave beautiful music to the film and by understanding the story line Kshitij Patwardhan gave exquisite lyrics. Sameer Patil directed, produced by Viacom 18 motion pictures and Chalo film banayein will be in your nearest theatres on the 12th of February.