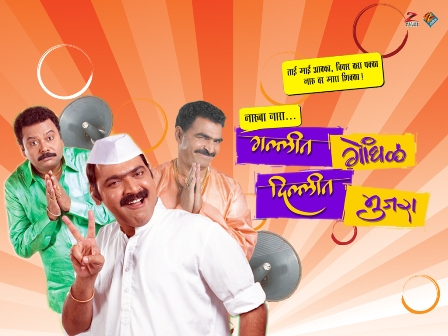 The man who made us laugh hilariously, whose jokes and punches made us cry by laughing a lot, none other than ‘Makarand Anaspure’ recent release movie ‘Punha Gondhal Punha Mujra ’ featuring some hilarious stars of Marathi industry ‘Makarand Anaspure’ and ‘Sayaji Shinde’ seems to be on the verge of its peak to make the audience laugh again n again.

However, if we talk about the movie then the movie is just a comedy film wherein the punches and jokes are awesomely executed to drag the audience as much as it can. Jokes apart the thing that lifted up the movie, on to the box office is because of some audience loving stars like Makarand  and Sayaji with whom the movie is just like a ship without a radar. Getting on to the collection then, the movie had not only collected some good bucks initially but till the end of weekend filled up the box office bags with some eye catchy numbers like the movie almost collected 80 lakhs approx in just three days which is actually a big number. Let’s see the movie can really make it to that level or not.