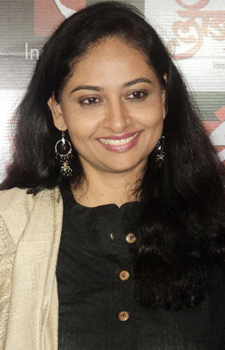 Synomous as Damini, the police inspector : Prateeksha Lonkar’s face is synonymous with the character of Damini, a super hit TVserial on Marathi television. Damini was a police inspector who stands against the injustice in the society and locks horns with the wealthy and influential people in her fight for truth. The serial was so popular that it was watched across Maharashtra and was dubbed and remade in other regional languages. Later the story continued with Damini’s daughter replacing her as inspector.

Prateeksha Lonkar is highly successful on TV:  She has been working widely in Marathi television industry and films.  Though she is known for her role in Damini, Prateeksha has contributed on Hindi Television widely. She started with the superhit serials of the late 80s and 90s including investigating thrillers like Marshal and Byomkesh Bakshi. Her Hindi serial Kahaani Nahi, Jeevan Hain gathered high TRP. As the serial was highly popular, it was remade in Marathi with the name Vasudha. Prateeksha played the lead role in both the language version. Such was her popularity.

Prateeksha and theatre :  She has played few very crucial roles in Marathi theatre. Her plays like Lagna, Amhi Sau Kumud Prabhakar Apte, Yelkot and Doctor Tumhi Sudha are critically acclaimed. On the stage, she is powerful, highly expressive and enchanting.

Character Roles in Hindi Films : Prateeksha has been a choice of directors for character roles. Beginning with comedy film Gudgudee in 1997, she has proved her mettle in comic roles as well. She has worked with the successful director Rajesh Kukunoor in his highly acclaimed films Iqbal and Dor.

Variety of Roles in Marathi: In Marathi, Prateeksha has contributed relentlessly in films, theatre and television. She has balanced comedy and serious roles equally. In Survanta, she essayed the role of a simple women who is caught in the struggle between family and love. She worked with veterans of Marathi cinema like Dr. Shreeram Lagoo and Nilu Phule in this film. She has experimented with family dramas, comedies and thrillers alike. Prateeksha is one of those actors who get into the skin fo the character and brings out the best.

Family : Having moved to Mumbai to pursue her acting career, Prateeksha found a life partner from the same field. Prateeksha married screen writer Prashant Dalve. The couple has a teenage daughter. Prashant has introduced her to various forms of acting.

Upcoming film Family Katta : Vandana Gupte’s production Family Katta has Prateeksha playing a crucial role in it. The film stars the much revered actors in Marathi cinema as Dilip Prabhavalkar and Vandana Gupte herself. Besides Sai Tamhankar is also a part of the film. It is all set to release on 7th October this year. Prateeksha recently appeared in the music launch function of the movie in Mumbai along with the rest of the cast.

Dr. Meena Nerurkar’s and Vandana Gupte’s Movies to Release Back to Back

Marathi Actors with Passion besides Acting