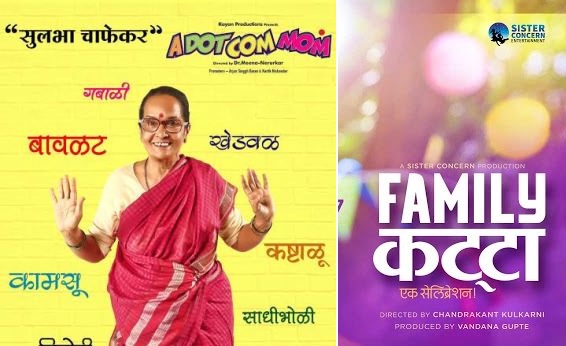 A Dot Com Mom is scheduled to release on 30th September. While Family Katta will release on 7 October. Both the movies have women producers. A Dot Com Mom is the brain child of Dr. Meena Gupte and Family Katta is a passionate venture by actress Vandan Gupte. It will be interesting to watch who scores over whom in weeks to come.

Dr. Meena Nerurkar: a practicing Gynaechologist , Dr. Meena Nerurkar shuttles between Philadelphia and Mumbai. She is active as an actor on American TV as well. We have seen her in Gauri Shende directed Sridevi starrer English Vinglish. Back home in Maharatshtra, she is acclaimed for her plays and has been awarded Mangeshkar foundation’s Aadishakti Award and Jagatik Marathi Academy award for the play “Sundara Manamadhe Bharali.”

She has written two books in Marathi for which she has received state honors.

A Dot Com Mom has been written, produced and directed by Dr. Meena Nerurkar. It is based on the story of a mother and a son living in India. Later as the son shifts to the US, the mother is left with no other choice than to go there. How the new place and its culture change the life of the people is the story all about.

Vandana Gupte : Vandana Gupte, on the other hand, is a well known face on Marathi as well as Indian audience. Be it the television or films, Vandana is appreciated for her roles as mother and mother in law. Family Katta has been produced by her and it marks her debut as a producer.

Family Katta will release  the week after the release of A Dot Com Mom. After her four decades of experience in acting in movies and theatre, the veteran actor joined her younger sister to start their own production banner. Family Katta stars Dilip Prabhavalkar, Prateeksha Lonkar, Gauri Nalawade, Sai Tamhankar and others. Dilip Prabhavalkar and Prateeksha Lonkar play the head of the family that unites after a hiatus for the golden jubilee celebrations of the couple. Vandana said, the subject Family Katta, is very close to her heart and she is excited to see how audience takes it.

Vandana Gupte has endeared herself to the Marathi audience with her roles in the films like Time Please, Samantar, Matichya Chuli, Andhali Koshimbir.

In Hindi, she is one of the most loved mothers on the television. Bandhan Saat Janmoan Ka and Sajan Re Jhooth Mat Bolo are her popular TV shows.

Both Nerurkar and Gupte have brought up movies with family flavors. While Family Katta has an interesting star cast, A Dot Com Mom stands on the foundation of a story that is based on family relationships.