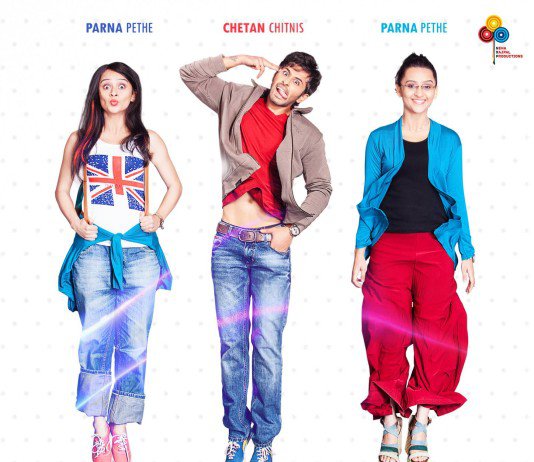 Ever wondered why there are so few double role films made these days? Obviously it is because the charm and wonder about the seeing the same person as two people is long gone. And may be all the plots involving two twins has also been exploited. Photocopy is an experiment to revive this old formula for comedy and fun and suspense. Two twins, their distinct characters, two love stories.. and of course confusion!!

The story: Mala and Madhu are two identical twin sisters. Despite of the their ‘photocopy’ appearance, that means their being exactly similar, their minds tread on different routes. They have completely distinct choices and preferences and interests. So what happens when a guy enter the space between them? Is there jealousy or happiness? Photocopy has an interesting theme and yet has a “been there, seen that” feel to it. But what is refreshing is the chemistry between the two twins. We have seen actors play two roles before but this is a campus film which has friends and boy friend in it. How the script has placed the idea of twins here is interesting to watch.

Photocopy is a love triangle but not exactly a common place one. What happens when Chetan Chitnis meets the two sisters separately and falls for each of them thinking that they are one single person. There is confusion and comedy and lack of logic. Forget logic and you can enjoy this film. You will definitely appreciate the ‘sisterhood’ in this story. It will be an enjoyable watch for twins. There is the kind of chemistry that each twin family will relate to.

When the guy finds out he has been dating two different girls that too sisters, it is a turmoil of emotions. And the crisis the sisters go through is even harder.

Music and lyrics: Neha Rajpal, the producer, has a deep connection with music so the expectation with music was very high. Two composers Nilesh Moharir, Shreyas Puranik and AV Profullchandra have composed music which is surely above average. Oli Ti Mati sung by Ketki Mategaokar stands out as most soothing one. It is an apt song for expressing the bliss of first love with lyrics penned down by Ashwini Shende. Tu Jithe Mi Tithe is sung by Swapnil Bhandodkar and Neha Rajpal. It is romantic duet and has a nice feel to it. “Pippani” sung by Vaishali Sawant and Pravin Kuvar is an enjoyable track.

Direction : Vijay Maurya , since his association with Anurag Kashyap and other Bollywood directors , have treated this story with a Bollywood touch. His strength lies in the fact that the film looks fresh and the actors have delivered convincing performances. The biggest Plus about the film is Parna Pethe’s character and her portrayal of it. This is nothing but the ingenuity of the director.

Performances : Parna Pethe is extremely impactful in both the roles. Be it Madhu or Mala, the two characters are poles apart and you will love the way the actress portrays them. Chetan Chitnis looks adorable. The two actors make a lovely couple on screen and that is the USP of Photocopy that you will love the visuals despite of the loopholes.

Dr. Meena Nerurkar’s and Vandana Gupte’s Movies to Release Back to Back