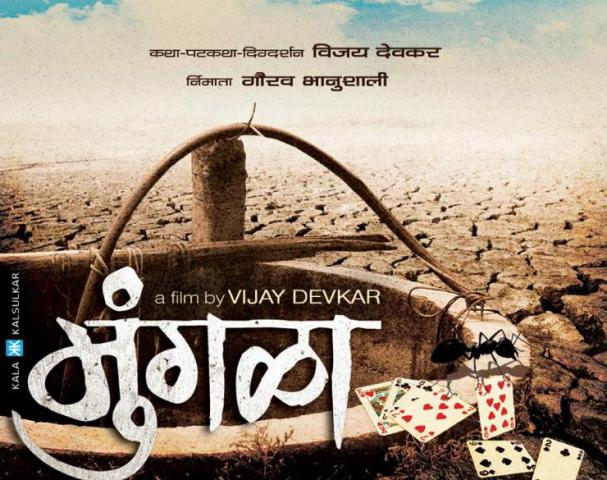 The good days of Marathi Cinema is back as we find more and more movies releasing on a regular basis. And to our surprise, we have two Marathi films hitting theatres this Friday, which certainly include Mungla. The film has Lokesh Gupte, Suhas Palashikar and Ganesh Yadav in the lead roles along with Jyoti Joshi, Deepak Karanjikar, Bhoomshan Ghadi and Janardan Parab in the lead roles. The film is produced by Gaurav Bhanushali, while it is directed by Vijay Deokar, who has also contributed in story, screenplay and dialogues. The music and lyrics comes from Vijay Gavande and Mandar Cholkar respectively. Now, let’s peep inside the film to get the crux of the same as under:

The story of the film is at the backdrop of the most eternal issue of water. The film is based in a rural area with water being the central issue wherein the village dwellers face severe kind of water shortage leading to drought conditions in a small village of Maharashtra. Amidst the issue, you have a love story at the background, which is also affected with this issues, however, the solution to this heinous issue comes in the form of sorting out the problem the best, along with doing other things right.

The movies at the backdrop or rural area having the issue of water has been in the vogue for Marathi Cinema, however, the novelty in the way of presenting the script makes the difference. In the past few years, there have been a number of Marathi movies covering the drought that are faced in the Maharashtra rural areas. And to name a few, the movies like Goshta Chhoti Dongaraevadhi, Zing Chick Zing and Gabhricha Paus had the issue. The film was able to address the drought situation along with the issues pertaining to unemployment. Here you find a young man played by Suhas Palshikar who prefers to stay in village for his living rather than going to cities, while the villagers are exploited by the bigwigs of the village has been part and parcel of the village’s life. The storyline is good but simply lacks innovation considering the fact that this issue has been addressed in the film a lot.

Lokesh Gupte who plays the character of a highly educated and frustrated your man has been good over the silver screen while playing the character, yet seemed lagging behind in many way. On the other side, Suhas Palshikar the villager has tried hard to understand the character and step into the shoes perfectly, which is a good thing about this film. The lady in the lead role called Jyoti Joshi too is seen decent. Similar is the story of the actors in the supporting role, which include Janardan Parab, Ganesh Yadav, Deepak Karanjikar, Chetan Dalvi and Bhushan Ghadi. And don’t forget to catch Sara Shravan in the role of an item number for the sensual effects. The lyrics of the songs too were good enjoys along with a decent music as well.

The director in this film plays different roles, right from directing the movie to the screenplay, story, dialogues and other things. Hence it’s inevitable to see him faltering him at different places. Unlike the old axiom, which says jack of all trades master in none seems to have come true for the director. He had the courage to take up all the jobs together under his capacity but at the end of the day, he was seen failing miserably, which at large affected the film. However, the music for the film and numbers seemed okay for the film, but other technical elements like cinematography and editing remains at the back.

Issues like water drought, unemployment, exploitation of educated people and others seemed to be an age old issues to be covered in various cinema and Marathi Cinema is no exception. However, the thing, which makes the difference, is the innovation in presentation of the film. It should be innovative in terms of script, performance and music, which is not the case with Mungla, which makes it just another film on the said issues. You can consider performance to certain extent but a film without much of content can only have the destiny to fall flat on the ground.