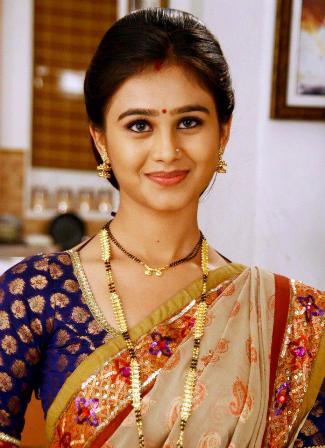 Mrunal Dusanis is a known actress in Marathi Small screen and a star in making in M Town. She hails from Nashik but was brought up in Mumbai. She was born on 20th June 1988. She did her schooling from Maratha High School and later went to HPT College followed by doing her Masters in Journalism. Soon she headed to the acting world to start her career with Marathi small screen doing her debut with Majhiya Priyela Preet Kalena, which followed another TV series called TuTith Me and both of these TV series were considered to be among the popular daily soap over the leading Marathi TV channels.

Some of her popular TV series include Mazhiya Priyala Preet Kalena, Eka Peksha Ek Apsara Aali and Remote Maza where in she was the Anchor of the show. In Assa Sasar Surekh Bai she worked with Santosh Juvekar, which received good response. The very same year she visited US for the BMM 2015 Convention and glad to see a good Marathi audience base out there. Talking about her personal life, she got married this February (2016) to Neeraj More in an arranged marriage at Pune. Her husband is a software engineer based in the US and she is likely to shift US giving an end to her role in the TV series called Asa Sassar Surkh Bai.