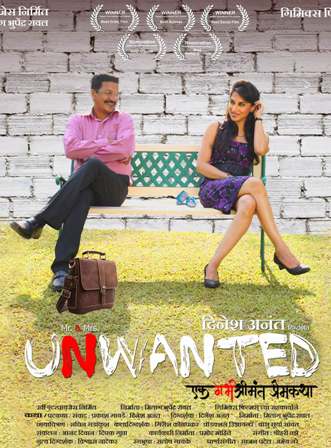 Synopsis: The M Town is simply not short of movies this year. You have a number of films hitting the theatres too often and one of the upcoming Marathi film include the Mr & Mrs Unwanted. The film is directed by Dinesh Anant while it is produced by Mitang Bhupendra Raval. The film was also nominated at the prestigious KIFF and NIFF wherein it managed to get recognition giving away the award called Best Jury Mention along with getting the Best Actress award as well. The film has Smita Gondkar as Riya, Rajendra Shisatkar as Rajesh and Shilpa Khule Vaidya in the lead roles apart from having Ajay Aambekar and Shekhar Hardikar in the supporting roles.

The film is all about a corporate working couple, which gives a catch in the film about their personal and professional life. Both Rajesh and Riya stay close with each other in their friend’s cottage as they wait to get the possession of their newly booked home.

Rajesh is employed at a private bank, while Riya is working in an event management company. The film is releasing on 23rd September 2016, the makers have released the trailer, which has a decent response. Well, stay tuned more about this movie or some other movie only at this space about M Town and small screen world.