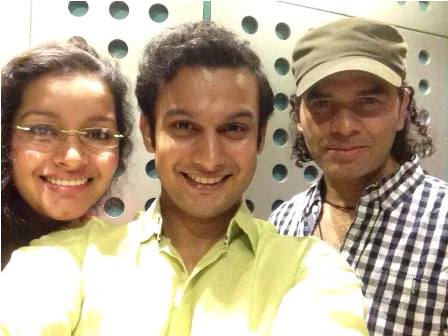 For all the fans of Mohit Chauhan , now there is a musical treat in Marathi from him. The extremely popular singer from the Hindi film industry has just finished recording for a Marathi song in the Renu Desai directed campus love story Ishq wala Love. The singer rendered his magical and deep voice to the song that begins with Helo , Kashi Ahes Tu. the singer went through painstaking training and lessons before he recorded the song so that he gets all the pronunciation right of Marathi which is an unfamiliar language for him.

The singer, who started his career with a music album under the band name Silk Route , had become a fad among the young generation of music lovers after the veteran music composer, A. R. Rahaman gave him important songs in his films. Right after the release of RockStar, Mohit Chauhan struck gold with songs like Naadaan Parinde. Today the singer can boast of having a huge fan following in the country.

In the recent years, we have seen Bollywood actors and even music composers stepping into regional cinema. Siddharth Mahadevan, son of renowned music composer Shankar Mahadevan is also making his debut with a Marathi song this year.

The video of the song sung by Mohit in the film was released on television. He is seen recording the song fervently donning his cap which is his style statement and swaying to the tunes of Marathi lyrics.

Why Renu Desai is thankful to her former husband Pawan Kalyan