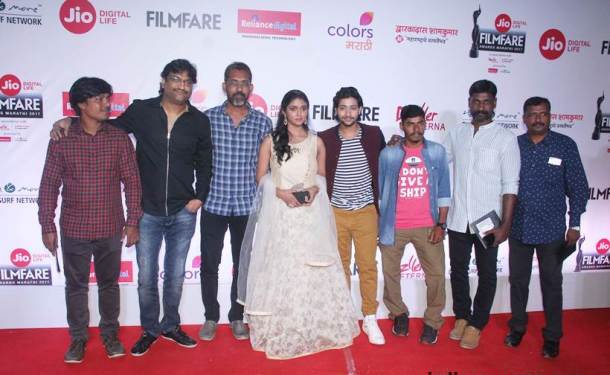 The M Town film Sairat needs no introduction. It created a huge buzz in the media attracting audiences far and wide getting even the National Film Award. Now, as per the recent buzz, the film has bagged the Jio Filmfare Awards Marathi 2017 award and it soon turned out to be  a memorable occasion, which is to be celebrated and acknowledged over the best of M Town Marathi cinema last evening at the known location called the NESCO Grounds, Mumbai. The Jio Filmfare Awards happens to be among the most anticipated award ceremonies of the year, which seemed rolled out over the red carpet.
This included even for the Marathi film fraternity. The last evening simply witnessed the best and among the most celebrated artists over the industry that take home the much coveted Black Lady and enthrall the audiences along with power-packed performances. The popular Marathi channel, which the Colors Marathi will televise the awards ceremony. The 3rd edition of the Jio Filmfare Awards Marathi witnessed the best of the M Town film industry simply seen walking over the red carpet. Some of the actors who were seen at the award function include Ashok Saraf, Shreyas Talpade, Akash Thosar, Sonalee Kulkarni, Nana Patekar, Rajesh Mapuskar, Ashutosh Gowariker, Sai Tamhankar, Rohini Hattangadi and singer Chinmayi Sripada.
The known actors like Pushkar Shrotri and Pushkaraj Chirputkar were seen entertaining the crowd with their humorous and cool banter as hosts. The evening also honored one of the finest talents in the M Town which include right from actors to technicians. The actors including Nana Patekar was seen getting presented with ‘Best Actor’ in a Leading Role (Male) while the lady Madhuri Dixit Nene was seen getting the award for the outstanding performance for the movie Natsamrat. Sairat was seen winning a number of other awards including getting the best film award. Besides the number of awards, the award show also witnessed a soulful musical performance by singers Jasraj Jayant Joshi and Priyanka Barve.
Share