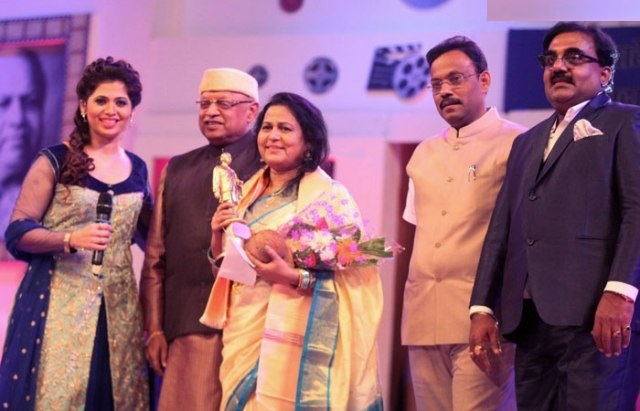 The well known Marathi and Hindi film actress called Sarla Yevlekar, was recently conferred with Life Time achievement award. It was given by the Dadasaheb Phalke Marathi Sanskrutik karya Trust in Mumbai, which was presented Mr. Vinod Tawde the cultural minister of Maharashtra. There were hordes of dignitaries from the Marathi film industry and special invitees. Sarla Yevlekar after receiving the award thanked for being overwhelmed for getting this award. The award was given by the Dadasaheb Phalke Trust which is a cultural group that was headed by Adv Mohanrao Pingale and Deepali Syed.

Besides, giving this award, a number of other awards were given to artistes and film makers, they also felicitate a number of technicians and workers in Marathi film industry. ‘Candle March’ was given the best film award went to Ankush Choudhari and Sumeet Raghavan shared the best actor’s award, whereas Sonali Kulkarni ( Sr.) has received the best actress award in this eve. Paresh Mokashi was awarded the best director’s trophy.