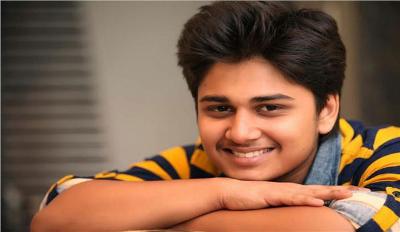 Laxmikant Berde, one of the stalwarts of Marathi cinema comedy, has left an indelible mark on the minds of Marathi audience. After his sad demise in 2004, the actor was bereaved by his wife Priya Berde also a renowned actress in Marathi and a young son. Now the actor’s son Abhinay will be making his acting debut next year.

Abhinay, son of Laxmikant and Priya , will be essaying the role of young Ankush chaudhray in the movie Ti Sadhya Kay Karte. The movie is directed by Satish Rajwade who met with success earlier with his works like Premachi Goshta, Sangto Aika, Popat.

Ti Sadhya Kay Karte will be a love story with the elements of everyday life. Ankush Chaudhary and Tejeswini Pradhan play the lead role. Abhinay’s parallel lead is Arya Ambekar whom we know as a singer. The young actor Abhinya Berde, with his charming looks and magnetic smile will remind of his father Laxmikant’s guileless characters that he played Hindi movies like Mene Pyar Kiya and Hum Aapke Hain Koun. The once popular comedy actor of Hindi and Marathi cinema is still remembered for his subtle and realistic acting. Let’s see how much Abhinay resembles his father. Comparisons are inevitable.

Ti Sadhya Kay Karte is a romantic comedy to release next year.