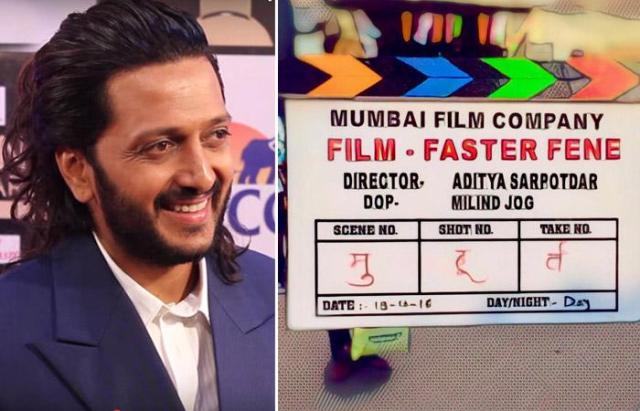 Riteish and Genelia Deshmukh earlier tasted success with their production ventures like Balak Palak, Lai Bhari. Now they are heading towards the third film which is titled Faster Fene. Rithiesh has always associated his production house with quality content. This time too his movie will be a good content family entertainer for Marathi movie lovers. Faster Fene is inspired by the cartoon book by R. R. Bhagwat which is popular with Marathi audience. The production company titled Mumbai Film Company launched the film with muhurat.

The details about the Faster Fene is not yet out. So far we know Aditya Sarpotdar will be directing the film. The young director had earlier shown his talent with the campus drama Classmates which was a box office success with an ensemble cast. Rithiesh’s production house apparently likes to experiment with new talent in direction as well as acting. Earlier his first production Balak Palak had the director Ravi Jadhav while Lai Bhari was shaped by the hands of director Nishikant Kamat. Now this latest film will be helmed by the directorial skills of Aditya Sarpotdar. All the two previous films have been exceptional box office and critical success. Lai Bhari was the highest grosser in Marathi of it’s time.