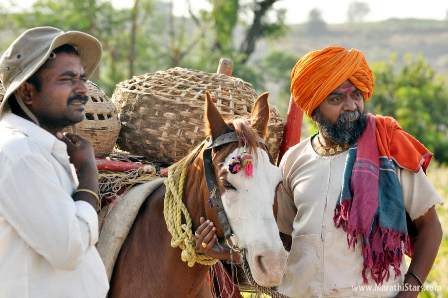 The Marathi Film Industry is among the matured groups in regional cinema. With movies like Khwada releasing this Friday, two national awards going to this film speaks volume for the same. The film is directed and written by the talented Bhausaheb Karhade, who is basically a farmer by profession and hence was able to put an edge in this film. The movie has Shashank Shende, Bhau Shinde, Anil Nagarkar and Rasika Chavan in the lead roles, while Yogesh Dimble, Surekha, Vaishnavi Dhore, Chandrakant Dhumal, Amol Thorat and others are seen in supporting and other roles. The music comes from Rohgit Nagbhide, while the cinematography comes from Veerdhaval Patil, and the filmmaker has chosen some of the best locations usually from the rural Maharashtra giving the best edge to the film. Now, it’s time to dig inside the film to get the gist of the same.

The Marathi movie film Khwada is revolves around the life style of shepherds who are among the most ignored community in India. Khwada means obstacle, which talks about the suffering of the families whose land has been acquired by the forest department compelling them to migrate from their place permanently. The film showing the family getting affected by the above issue comprises of Raghu, who is the head of the family, while his wife and elder son Panda and younger son Balu and the man’s grandchildren suffer the most. Once the family is displaced from their original place, they are seen moving from one place to the other along with their herd of sheep for their sustenance. They are left with no option but to showcase a number of harsh problems and hurdles, which are faced by the family along with their individual entities. Above, you find a village administrator who is seen exploiting them. At this very juncture, you find a sudden change seen in the attitude of the youngest son called Balu. Now, what the next is worthy to explore.

The film after using protagonist is able to portray the complete story of the shepherd community and the hurdles they face in their ways. Since the movie has been made on the real time locations, it was able to create a very good impact on the content and story of the film. The film appears more realistic showcasing perfectly the challenges faced by the family and the heavy price they have to pay for their survival with dignity and honour. Despite the debut film of this man, he was able to portray the character the best over the silver screen. The content appears more realistic, thanks to the performance that makes all the difference.

Its really hard to find flaws within the movie, after all the film has managed to secure two national awards. Talking about the characters of the film, they are so smartly interwoven inside the film that they simply appear to be the most realistic in it showcasing the real life shepherds the best. Hence you find the film more compelling and thus connecting the characters the best. The character of Raghu played by Shashank Shende is simply flawless, but perhaps more credit goes to the director who was able to extract the max from this man. Similarly, the character of Balu by Bhau Shinde too was robust enough to be enjoyed by the audience. Lastly, don’t forget to appreciate the performance of Anil Nagarkar who was simply outstanding in his negative character. Talking about the supporting roles from Yogesh Dimble, Vaishali Kendale, Rasika Chavan, Vaishnavi Dhore and Chandrakant Dhumal, they too were cool in their characters.

We all know how the lifestyle of any shepherd family goes, yes it’s too flow and sluggish, hence if you have gone to check this film with whistles and blows then you have gone at a wrong place. It is not a regular or conventional Masala movie, which gives you spices to enjoy. Direction has been perfect and close to reality, which makes it on the upper hand. The other elements like editing, location, screenplay and other technical elements went smooth, which helped the film to survive in terms of rating and technicalities despite the debutant director.

The film has managed to get two awards one national and other from the state while screening at different places. However, the film failed to promote itself in the media to create the right buzz, which it deserved in the public forum. However, this doesn’t question veracity of the film but certainly makes it distinct over the silver screen. You may not go for this film considering the raw issue being covered in it, but in terms of filmmaking technical aspect, Khwada is able to establish the high yardstick for the filmmakers and film enthusiast. You may not find the film good in terms of collection and business, but content wise its rich enough to be given a better rating.