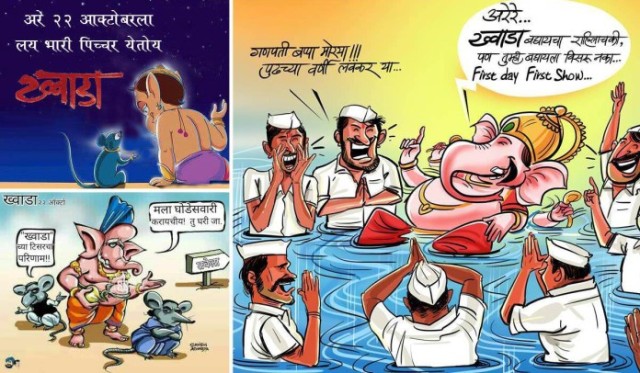 Khwada the Marathi film by Bhaurao Karhade is now gearing up for its release this coming 22nd October. In order to try something new and interesting the Khwada team has embarked with a funny cartoons of Ganesha over the social media site. This cartoon was made by the popular cartoonist Uday Mohite and ever since it was shared on the social media, it was able to get a decent response on the social media platforms including Facebook, WhatsApp and Twitter.  Mohite has been known for similar sort of work previously as well while doing the movie of Balak Palak and Timepass 2.

The film has Shashank Shende in the pivotal role, while Bhausaheb Shinde is doing the debut in the film. The others in the film include Yogesh Dimble, Vaishnavi Dhore, Rasika Chavan, Nana More, Amol Thorat, Vaishali Kendale, etc. Most of the locations in the film belongs to Ahmednagar and the film is known to have its art direction along with other several key elements, which make the film an important event to catch. The film is produced by Mangesh Jodhale, while you have a look at the poster and do let us know how did you find it.