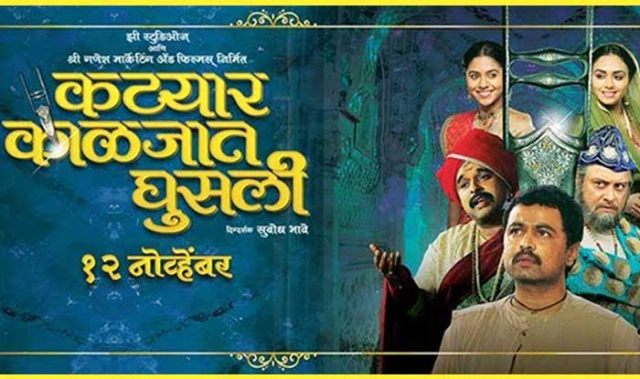 Katyar Kaljat Ghusli is one of the Marathi movies released this Diwali apart from the sequel. The film is based on a popular play with the same time, which is a musical film having Sachin Pilgaonkar, Subodh Bhave, Mrunmayee Deshpande, Amruta Khanvilkar, Sakshi Tanwar and Shankar Mahadevan in the lead and supporting roles. The film is directed by Subodh Bhave, which is his debut film in direction who is more known as a talented actor, while he is also seen playing the character called Sadashiv whereas Amrua Khanvilkar is seen playing the character of Zareena. Now, let’s us dig deep into the film to get the crux of the same.

The film revolves around two musical families with one being led by Pandit Bhanu Shankar Shastri played by Shankar mahadevan, while the other is the Khansaheb played by Sachin Pilgaonkar.  In the annual singing competition, which is organised by the Maharaja of the State, Panjitji beats Khansaheb, however, this doesn’t stops the latter and he chooses to challenge Panditji till he finally beats after challenging the 14th times. This was just because, Panditji simply doesn’t sing the song, which makes Khansaheb the winner. This brings in Khansaheb and his daughter in the royal palace appointing him as the royal singer. On the other hand Panjitji is off from the state without informing anyone including her daughter Uma, which makes her leave the royal palace as well. Amidst all this, there comes an artist called Sadashiv who wanted to learn music from Khansaheb, however, the latter understands he belongs to the other family issue, which rejects the idea. What goes at the last is interesting thing to catch.

The Marathi film actor Subodh Bhave, in his debut directorial venture, is able to recreate the incredible magic of the popular musical play by the same title released four decades before and the effect you find is simply plain spellbinding. You can therefore find this film to be a special Diwali treat for those who love music. Though it may not challenge the blockbuster film of Salman Khan released this festive time, yet it will remain to be an important milestone in Marathi Cinema. It is interesting to catch Sachin speaking such a good Urdu, while the singer Rahul Deshpande is seen holding the breath with his effortless singing. Also, the debut of Sakshi Tanwar in Marathi film really makes all the difference.

On the other side, you have Shankar Mahadevan playing the character of Panditji who has enthrals the audience. He has tried to make the four decade old story very much relevant to the eternal music. This movie is able to reinstates the fact that music has the power to bind people not just across the nations but generations and civilizations as well. Ironically, you can find the plot of the film revolving around the two musical families. Khansaheb is seen waging a war of music against Pandit Bhanu Shankar Shastri whereas Khansaheb is seen representing the Mughal style singer who is at the central stage of a typical Maharashtrian Hindu ruler. This simply indicate how, the two communities have been part and parcel of each other while staying together before the British arrived. However, the film is more about the music and the way people misuse it in the helm of the ego and power.

The film is all about rivalry between two known families from Indian music. The man took 14 long years to beat in the battle of music, however, when it comes to power there begins the usage of power and ego, which is interesting to catch. Thanks to the best portrayal of the talented actors roped in for the film. In terms of content, the film has the same old storyline of the 4 decades old play, however, when you talk about presentation