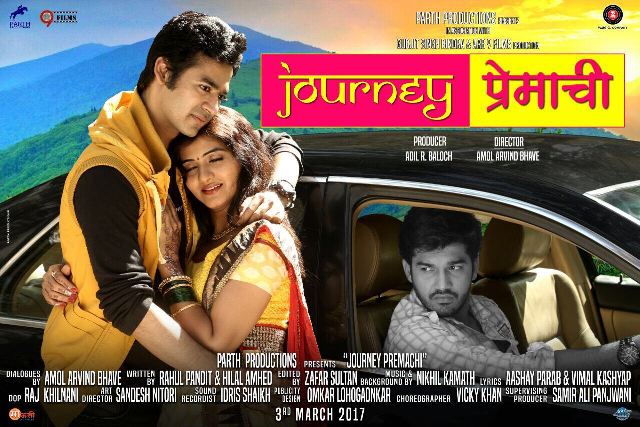 The crew is as follows :

Journey Premachi is a Marathi movie that will hit the theatres on 17 February 2017. The movie is a romantic comedy and a love drama that is scripted with the present day characters who are tech savy and self indulgent. It is a romance drama that will create rib tickling laughter as well as evoke some emotions. The film is produced by Parth Productions. The leading actors of Journey Premachi are Kashmira Kulkarni, Abhishekh Setiya and Madhav Deochakke. The story revolves around three youngsters who are secretly in love forming a love triangle.

Releasing on 17 February, Journey Premachi has foot tapping music with great Marathi lyrics. Kashmira Kulkarni will be returning to Marathi silver screen after a gap while Abhishekh Setiya will be seen in a Marathi film for the first time. The star cast looks very much cool and stylish. The makers have kept the feel of the movie very stylish and peppy. Avadhoot Gupte has rendered his voice to songs in the film.

Love is in the air between Amey Wagh and Mithila Palkar