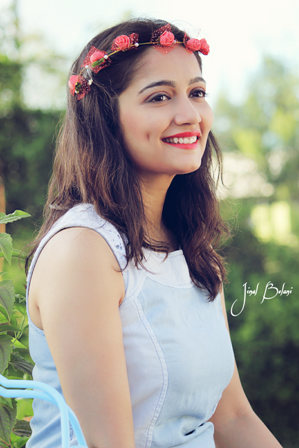 Jinal is an actress in Bollywood films and Hindi television. She has worked in various advertisements and TV serials like Laaga Chunri Main Daag on Doordarshan. She has acted in a movie Patel ki Punjabi Shaadi. She will be seen in Dhanush starrer Bollywood film Nimmo.

Jinal was born on 29 April 1992 in Mumbai. She was an intelligent and smart young girl studying in reputed school in the city. She graduated from Mithibai College from where she took her BA and later her MA. Her parents are Subhash Belani, Pallavi Belani and she has a younger sister named Mansi. Starting with few modeling assignments, Jinal succeeded in making a name for herself in the glamour industry. She was cast in the Doordarshan serial Laaga Chunri Main Daag which was loosely based on the movie Fashion wherein a small town girl struggles to reach heights in glamour and faces the dark side of the industry.

Jinal’s work in advertisement campaigns got her recognition. She has acted in advertisements of various products such as Dove, Sahara Mineral water, Doy Care, Micromax, Hawkins, Roop Sangam Sarees and many more.

Jinal’s entry into Bollywood came after her work in the serial Laaga Chunri Mein Daag which had high TRPs on the channel. Jinal was cast in the Bollywood film Patel ki Punjabi Shaadi in which she shared screen space with actors Paresh Rawal, Vir Das, Rishi Kapoor and Payal Ghosh. It was a family comic drama that went largely unnoticed in the year 2015.

Jinal is presently working in the film Nimmo which is directed by Anand L Rai. Southern superstar Dhanush will be playing a cameo in it.