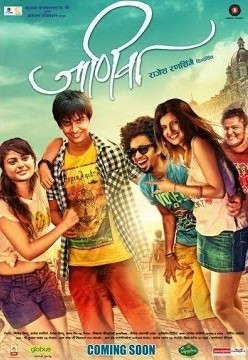 A film with youngsters easily grabs the interests of young cine-goers. Marathi movie industry is riding the tide today with lakhs of people in India watching and supporting this industry. There is still time for this film fraternity to match up to the popularity of Bollywood, but Marathi film industry is one of the leading regional film industries today. Janiva (2014) has released on the 8th of August and have been liked and lauded all over. Capturing the sensibility of the youth has been tried and tested in many movies. This is exactly what Janiva has done. Casting of youngsters has been appropriate and the movie has also a strong supporting cast comprising of the top renowned television and film faces.

Plot : Janiva is a social drama which captures the fun-filled life of five teenagers. The plot is complex and the situations are compelling enough to hook the viewer till the end of the movie. The song Morya Morya has become quite popular and is currently a popular Marathi chartbuster. The voice of Punjabi pop star Daler Mehendi has given the score its happy and festive feel. The movie is been talked about and is run in the box office has been appreciable.

The story is about the protagonist Sameer Deshpande who is a complex and progressive-thinking young boy. He is creative, tech-savvy and yet has a socially alert and responsible side to him. The fact the young man holds up traditional beliefs and values like honesty and uprightness, is what the new generation has to capture from the film. The concept of the movie is new-age methods of dealing with the existing problems of the society. They compose band songs and also use social media like YouTube and Facebook to reach out to people and spread messages of good thinking and noble actions.