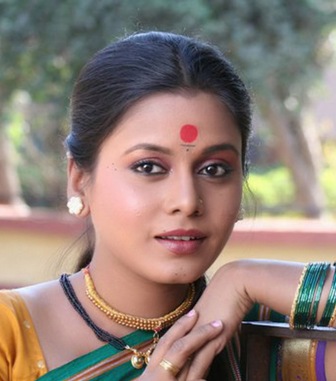 Hemangi Kavi is a known name in Marathi world who hails from Mumbai. She was brought up in Kalva, Thane District.. She did her schooling from SVPM High School Kalva, Dist. Thane. She then went to JJ School of Arts considering her interest in creative fields. After completing her graduation in arts, she went on to pursue her career in arts. Soon she got attached to theatres and her first play was Shame To Shame, which helped her to get recognition in the acting world. Soon she got another play called Many Happy Returns giving her the chance to glow in the theatre group. This helped her to make her entry into the small screen.

At the small screen, she got the chance to do a TV show called Maddam Sasu Dhaddam Sun at Saam TV. She soon was seen in other TV serials including Fu Bai Fu’ and comedy TV serial ‘Maddam Sasuani Dhaddam Soon, which was aired at Zee Marathi and Mi Marathi respectively. She then headed to Marathi Films, which started with Rangee Berangee in the year2008 and the same year she got another film called Dhudgus. Since then it was no looking back as she got a number of films, which include Manatlya Manat ,Kon Aahe Re Tikade, Paradh, Davpech,  Paach Naar Ek Bejaar, Pangira, Fakt Ladh Mhana, Swarajya, Goal Berij, Pipaani and Gadad Jambhal.

Though she started with small roles, however, the films like Manatlya Manaat, she got the lead roles, which helped her to carve her niche in the Marathi industry. She was also applauded for her performances with awards like Sakalpapurti Puraskar and Swami Vivekan and Puraskar.