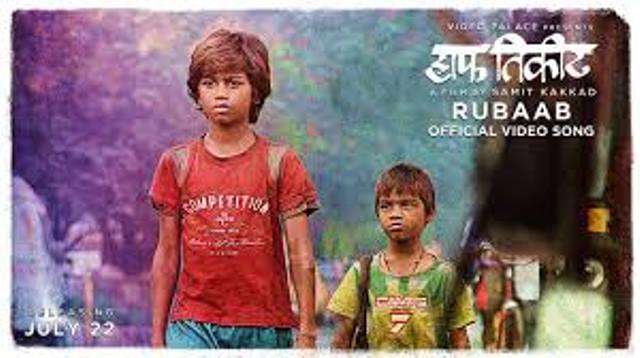 This week in M Town we have a solo release that comes in the form of Half Ticket. The film is directed by Samit Kakkad and is produced under the banner of Video Palace with people like Nanu Jaisinghani, Suresh Jaisinghani and Mohit Jaisinghani. The film has Bhalchandra Kadam, Priyanka Bose Kamat, Shubham More, Vinayak Potdar and Usha Naik in the lead roles, while Jaywant Wadkar, Shashank Shende, Shrikant Yadav, Kailash Waghmare and Nitin Bhodhare are seen in the supporting roles. the film is an official remake of a Tamil movie, which is an Award Winning film produced by Dhanush called Kaaka Muttai. How about checking the crux of the film in the following paragraphs:

Any good movie of kids needs to be a good film at the basic level and you cannot compromise on this quality as the story revolve around the children or simply because you have a young audience. The previous year film Kaaka Muttai was an award winning film at the national level and is a classic example to this. The M Town has now another called Half Ticket, which comes strong as a remake by Samit Kakkad. The basic story of the film is very much similar to the last year’s Marathi movie called Cinderella, which deals with two kids from the slum who is keen to buy a fancy doll. The movie had some flaws in its production along with some loopholes in the climax.

However, one of the key things about the movie is its narrative that appears to be uplifting and simple even when the movie is layered and talks about a number of things including the cost of happiness, socio-economic diversity and discusses the flipside of the globalization and the deep rooted corruption seen over the social fabric. Over the top, it is a straightforward adventure of the slum dwellers. The elder brother happens to be an introvert having attitude issues while the younger one is a happy go lucky kid having big dreams and the faith in the capability of the brother.  The relationship between the two characters along with the onscreen chemistry of these two boys showcasing them in the film happens to be the cornerstone of the complete film. The duo is based in Mumbai slums living with their mom and grandmother. The head of the family is behind the bars for some reasons and thus the complete clan suffers due to this.

The family has left out with no money and soon the elder one is seen picking up the coal over the railway track in order to sell it to get not much from it. Seeing the money aspects of the city they end up getting frustrated to an extent that they plan to buy pizzas from a newly opened food joint. Soon they are seen working for it but the social taboos is seen making them to pursue this dreams. Thus the two are seen fighting this situation taking things ahead to get a bitter end.

The film is then seen winning at other aspects of the movie as the film treads the same way the original Tamil movie. The rags and riches identity of the city is seen getting the message through. There is hardly any effort to glamorize in order to add the commercial value or make things simple in order to get the audience. Much of the stark reality around us, the movie is seen holding the mirror. It is much difficult to work with the kids and director that has managed to get the right performances from the two brothers played by Shubham More and Vinayak Potdar. The supporting cast of the film from the actors like Priyanka Bose Kamat and Usha Naik seem to be very much par. The cinematography and actual Mumbai locations of Sanjay Memane simply work perfect in order to get the texture of the movie.

Half Ticket can be called as a tale that ends up on a positive note however, this gives us to think about the same. The film though is seen repeating the viewing value owing to its rich content but Half Ticket on the other side should fetch good amount of results from its viewing. Well, avoid limiting this film to be the kid’s movie if you are able to move with the subject and the film then it can be for you.