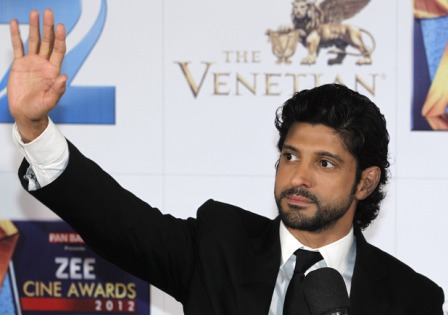 Farhan Akhtar likes to keep trying new things every time. Right after his debut film as director which was Dil Chahata Hain, he has been trying his hand from various things like acting, singing, dancing and what not. Now the news is the actor who recently bagged best actor award for his performance in the Rakesh Om Prakash Mehra directed Bhag Milkha Bhag , will appear in a guest appearance in a Marathi film titled “ Por Bazaar”. The film is based on the sensitive subject of child trafficking in the country and is presented with a social message. Reportedly the actor shot for the film the few scenes he has in the film. Manva , the director of the film was more than just happy at the occasion.

She was all praise and gratitude for the actor. Manva revealed that Farhan was initially thoughtful about accepting the offer. But after the film’s theme and script was narrated to him, he was so impressed that he promptly gave his consent for it. Not only this, Farhan showed wonderful diligence in making his dialogue delivery perfect. The actor, a fluent Marathi speaker, went the extra mile to learn the correct pronunciation so that he fits in the role perfectly. The director is elated that Farhan acted painstakingly.

Sai Tamhankar and Ankush Chaudhary play lead roles in the film which has many fresh and young faces making their debuts.

Why Renu Desai is thankful to her former husband Pawan Kalyan