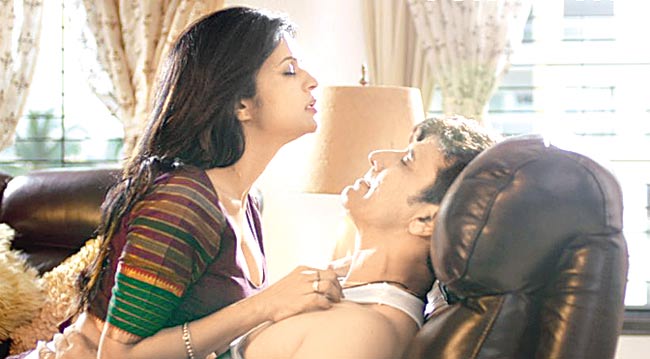 Dombivli Return has actor Sandeep Kulkarni ,who is venturing into Hindi film production with his latest film Dombivli Return, is seen in a steamy intimate scene wit the actress Siya Patil in the film. The actor who is also the producer of the film adhered to the script which requires the two actors to indulge in an intimate scène. The character played by Sandeep makes love to Siya’s character in an extra marital affair. Though the scene was agreed upon much before, the two actors were reportedly very uncomfortable before the shoot began . But Sandeep ,the producer, made efforts to make things comfortable between them and eventually the scene turned out fine.

Sandeep Kulkrani ,who has a long acting career behind him, has acted in many Hindi and Marathi serials and films. Dombivli Return is the actor’s first production venture in which we will also see singer dancer Rajashree Sachdeva after a long break from entertainment industry. The film is directed by Mahendra Teredesai. For this film, the actor takes inspiration from his earlier film Dombivli Fast which was a marathi film. Amol Parashar and Hrishikesh Joshi from Marathi films are also playing crucial roles in the film.

Wonder how it is like to handle the two roles of producer and actor together!