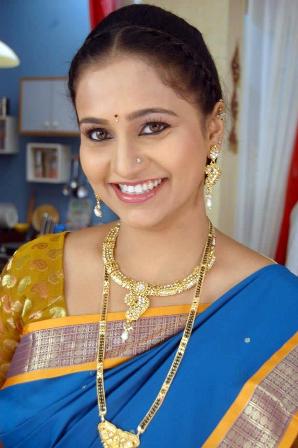 Dipti Ketkar was earlier known as Dipti Samel is a popular name in M Town. She hails from Mumbai wherein she was born and brought up at. She was born on 16th April 1981 and did her schooling from St. Thomas High School in Goregaon East, followed by her graduation and PG from Nalanda Nrityakala, Mahavidyala from the University of Bombay. She has been active in plays and theatre since her school days and used to participate in cultural activities in her school. In fact, she was barely 12 years old when she got linked to acting. Hence she has come long way to prove her mettle in the M Town along with the small screen as well.

Now talking about her journey in the acting world, she made her debut in small screen with the serial called Awaghachi Sansar with a small role and then another serial called Kunku. However, she got the popularity with the role of Abhilasha in the popular serial called Mala Sasu Havi aired at Zee Marathi. She also participated in reality shows in Marathi TV channels including Halla Bol – Dance Show, ‘Eka Peksha Ek: Apsara Aali 2 – Dance Show, etc, while was also seen in Manushdevta’ and Avaghachi Sansar – Sharda Raje. In Hindi channel she was seen in Bollywood Dhamaka. She also did a Gujarati TV show called Gujjubhai Gaam Gajavyu.

Some of her Marathi movies include Rangrao Chaudhary, Bhakti Hich Khari Shakti and Chal Gammat Karu. Talking about her personal life, she was married and settled in US with her husband Romit Ketkar and has also two kids but returned home in 2005 and since then she got engaged in her career in acting. She is back in news for her new TV shows, which are to be announced to soon. Stay tuned with us to know about her and other actors in M Town and small screen only with us.