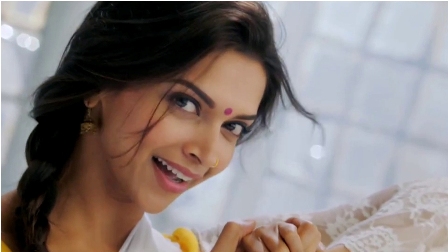 Bollywood heartthrob Deepika Padukone played a Marathi mulgi in the Diwali released Happy New Year. Deepika who basically hails from Banglore and has Konkani as her mother tongue, played a Marathi girl first time. She essayed the role of a Marathi speaking Mumbai girl who earns her living through dancing. For the role Dipps was seen mouthing out dialogues in Marathi now and then. Her accent is totally Mumbaiyya. Farhan Khan’s Happy New Year has released to a warm response this Friday. Shahrukh and Deepika have been paired once again after the 2007 blockbuster Om Shaanti Om.

When asked how interesting she found Marathi diction she replied that since she is residing in Mumbai for more than seven years, she found it pretty easy. Besides her family speaks Konkani which is a brethren language of Marathi. Due to the similarity of the two languages, Marathi diction came pretty easy to her.

Deepika who is a native of Bangalore relocated to Mumbai for her early Bollywood assignments. She said Happy New Year was a nice chance for her to get into the shoes of a localite Marathi girl after spending so many years in the city. Deepika has given a stunning performance in the film which is a thriller and a comedy directed by Farhan Khan.