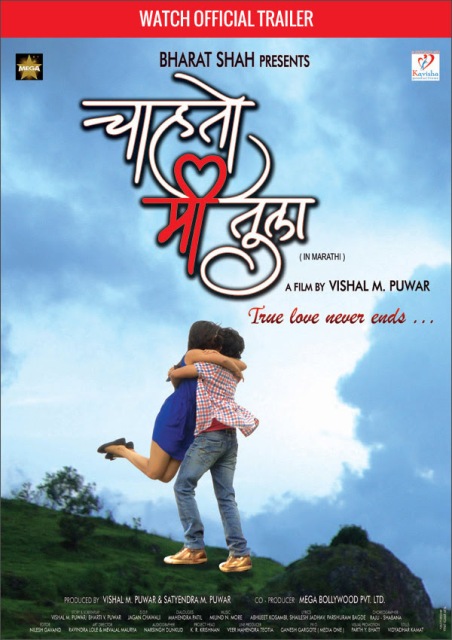 Chahto Mee Tula ” is a outcome when versatile and experienced bigshots from entertainment industry work together. Bharat Shah presenting along with Direction from Vishal Punwar presents romantic story, finding its genesis form 90’s bollywood romance,love is blossomed while studying, reaching to end with difficulties and achieving true, platonic love.Though movies seems to be old wine in new bottle , but Marathi industry actors rekindle the feeling of old times.

Trailer release of the Chahto Mee Tula promises a confirmed entertainment, not just restricted to regional audience but also to romantic fans of Bollywood. Shruti Marate proving her acting mettle in tamil and serials along with Marathi movies,is a beautiful and intellgent cast along with actors from Marathi industry will enrich the movie lovers.
Though movie shot in and around Mumbai and regional locations, direction by Vishal Punwar effectively puts everything into place as seems form the trailor. Chhato Mee Tula will give the audience every worth of their bucks spend and will create pathway for more conglomeration of entertainment industry in future.
Casting : – Prasad Oak, Shruti Marathe , Sulekha Talwakar, Meghna Jadav, Mithila Mirajkar, Bharat Ganehspure, Vidyadhar Joshi, Ananda Karkare, Tajshree Dharne.
Share