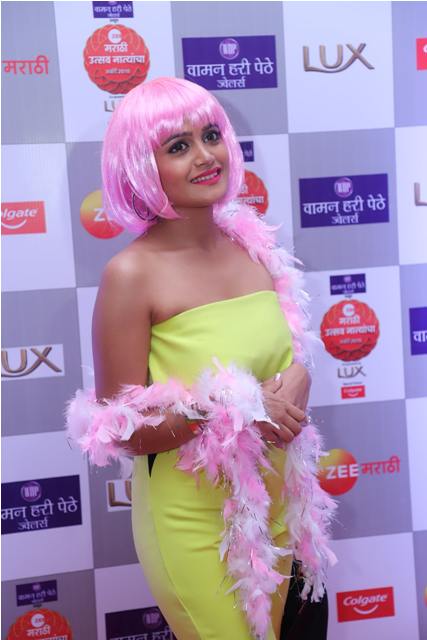 The Zee Marathi TV show called Majhya Navryachi Bayko has been applauded a lot from the audiences since the recent past time. The lead actors of the show including Radhika, Gurunath & Shanaya are not less than family members for the audiences while the chemistry found in between the characters too is simply flawless. We have seen Isha Keskar in the recently held even in all together a new avatar, which seems to be making good show in the media.

The show has a new Shanaya in it which is now being done by Isha Keskar, who is soon was seen replacing Raskika Sunil in the TV Show. We see Ishan is also very much fond of shopping in her real life like what we have seen Shanaya in it. Her sense of style is excellent and is very much different adding loads of fun. One can easily find her style to be different and unique as she walked in the recently organized TV awards called the Zee Marathi Awards 2018 Nomination Party.

As the theme of the party was Neon and Pop, Isha was seen exploring a different theme in her own new style and way. She was among the few guests found in the party that made the headlines the most. She was seen standing alone in the guests at the said party. She was seen wearing a neon fluorescent, which seemed with coloured outfit carrying a pink boa & a pink wig! Isha was seen carrying herself the best and with great confidence throughout the party! Isha is seen getting nominated in three different categories; which include Best Character, Best Villain, Best Comic Character Zee Marathi Awards!