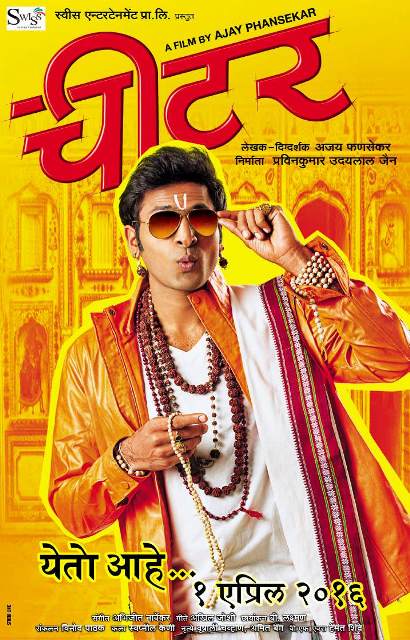 The filmmakers of the upcoming Marathi movie called Cheater is gearing up as they are seen embarking with the first look poster. The film has a fully yellowish and completely attractive, which is hitting on 1st April. If you the caption captivates, you need to wait for a bit to catch its trailer and then catch the entire film. The film is produced under the banner of Swiss Entertainment Pvt Lrd, which is directed by Ajay Phansekar and produced by Pravinkumar Udaylal Jain. The movie has Hrishikesh Joshi, Vaibbhav Tatwawadi, Aasawari Joshi, Suhas Joshi and Pooja Sawant in the lead roles.

The movie’s music comes along from Abhijeet Narvekar, while it has four different songs and the lyrics are jotted down by Akhil Joshi. The film has four songs and the voice for the same have been given by Sonu Nigam, Urmila Dhangar, Anandi Joshi and Avdhoot Gupte. The film has been shot at Mumbai and Pune apart from having the foreign locations of Mauritius to catch the picturesque locations. The film has the tagline called Be Safe, Cheater is Coming, which will hit the theatres on 1st April 2016. How about catching up the first look poster of the film cheater as under and don’t forget to get its gleam as under: