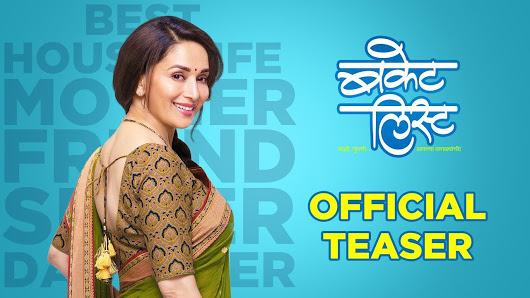 The B Town popular actress Madhuri Dixit seems to have represented the Marathi culture in a number of Bollywood films since years although she has never worked with any M Town film. However, at this stage when she has won hearts of millions in the B Town, she thought of doing her debut in M Town. So, the wait to see the Dhak Dhak girl on the M Town film has been over and we have a film that has MD in the lead role. The makers have even released the teaser of the film as the movie has reached to its completion with shoots being complete.

As we see the movie reaching out to the post-production phase, we see the film reaching out to the audience with a teaser. The film Bucket List has the twist in the story, which can be witnessed in the teaser to some extent. The Dhak Dhak girl plays the middle age women who is a homemaker and madly in love with her family. She leaves no stone unturned to make everyone happy in her family, but at the same time she has another side. The teaser as we check is all about the lady called Sai and the way she deals in her role of a homemaker.

And then we see the twist that seems like whether Madhuri Dixit Nene is playing a dual character in the film or we have a lady with split personalities. Also, we find Sumeet Raghavan in the film as well in the film opposite Madhuri. The makers worked hard to complete the film so they deserve to get the respect for the same by checking the teaser released in the media. How about catching up and getting the same and returning with the review of the same.