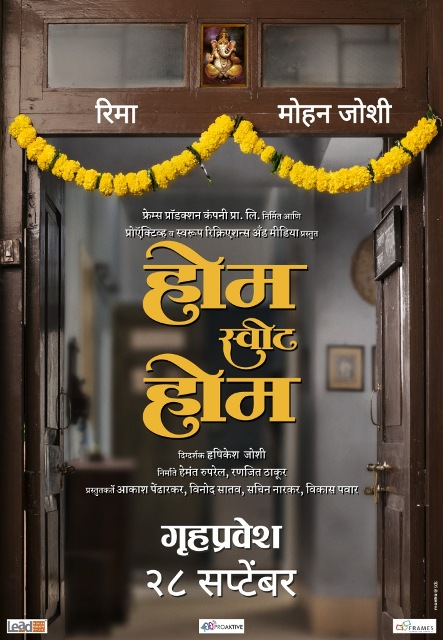 Sweet Home the M Town film happens to be the much awaited film for the Marathi Cinema goers. Teh film is directed by Hrishikesh Joshi who happens to be a director cum actor in M Town. So, the makers have finally made the trailer of the film out in the media thus breaking all the silence of the M Town film lovers. The movie has Mohan Joshi, Prasad Oak, Spruha Joshi, Vibhavari Deshpande, Sumeet Raghavan, Mrinal Kulkarni and the late senior actress Reema Lagoo in the lead and supporting roles in the said movie. The other reason why this film happens to be so special for the M Town and others is because it happens to be the last film of the legendary actress.
So, we have a film with an actress who is even entertaining the audience after her death. So, get set to get entertained through her incredible work. One of the vital aspects of the film which is also showcased in the trailer is the rich content of the film, which happens to be a tangible family drama. Just avoid the loud presentation, which makes the film really stand alone and straight in itself. Mohan Joshi who happens to be a senior actress had a great chemistry with Reema while in many of their works come together as their chemistry can be easily experiences over the last time seen over the screens.
The movie also deals with the confusion and dilemma of the family that relates to their home. As they tend to become emotional and it questions will selling of this home is going to change anything about the family. All these questions haunts them and are dealt in a tangible fashion thus giving a good answers to these questions. If you catch the trailer of the movie you would realise the importance of the film. If you are yet to catch the trailer, have a look at it and yes do not forget to share your views on it. By the way, the film hits the theatres on 28th September 2018. Have a look at the trailer first:
Share