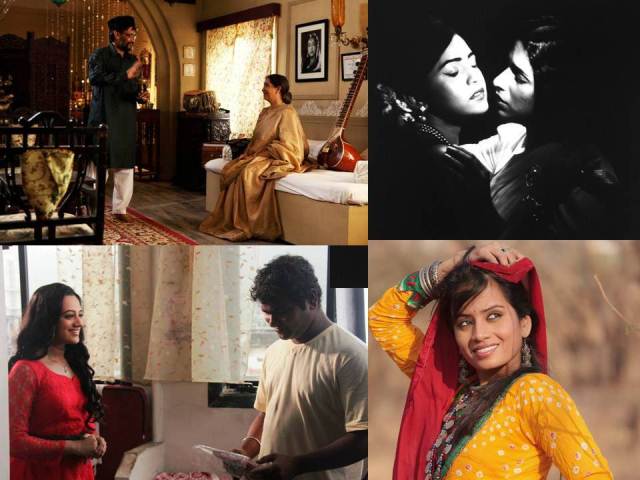 The four short stories are realistically beautiful and keep you engrossed till the end. Subtle yet powerful performances make the film a very interesting watch. All the four stories have been directed by different directors.

Bioscope begins with a narration by none other than Gulzar and leads us to a story titled Dil – e – Nadaan. The story is based on Mirza Ghalib’s poetry. The story itself happens like a poetry on screen with visuals of musical instruments. It is a story about two music maestros caught in an emotional turmoil. The oneness of music and life is portrayed in a realistic manner. This story is directed by Gajendra Ahire.

The next story, Ek Hota Kau, is directed by Vijay Mane. The story deals with the conventional aversion towards dark skinned people. Spruha Joshi and Kushal Badrike play lead roles in it that explores certain “ dark “ aspects of our society. Badrike is in love with Spruha ‘s character but abstains from expressing his love because he is dark skinned and so he believes he would be rejected by the girl. The title symbolizes a crow who is a part of the society but is looked at with hatred because of it’s unacceptable appearance.

The story that follows is titled ‘ Bail’ and is directed by Girish Mohite. It takes inspiration from Loknath Yashwant’s poetic lines. It is based on the issue of farmer suicides in Vidharbha. It explores poverty and how relationships take shape in such dire situations. Mangesh Desai and Panjab Sarkate.

The fourth and last one is the most hard hitting of all. A story by Vijay Tendulkar and a poem by Sandeep Khare is fused together to create a story that hits you hard. Even when India boasts of it’s growing economy and educational status , it deals with various grave issues at the bottom level. Inequality of the sexes and restrictions on creative expressions and so on.. this one titled Mitraa is shot in black and white and questions whether our society has really emerged from the shackles of orthodox practices. Rajiv Jadhav, the acclaimed director, has helmed this one and it stands out as a powerful story about the “ unreasonable “ side of India.

All the four directors Vijay Mane , Gajendra Ahir , Rajiv Jadhav and Girish Mohite have put their best foot forward in bringing out this wonderful confluence of drama , stories and reflections from the commoners’ life. It is a must watch for movie lovers.

The film Bioscope does full justice to it’s title by presenting stories like a collage. Bioscope brings together four short stories that touch the heart of the audience.