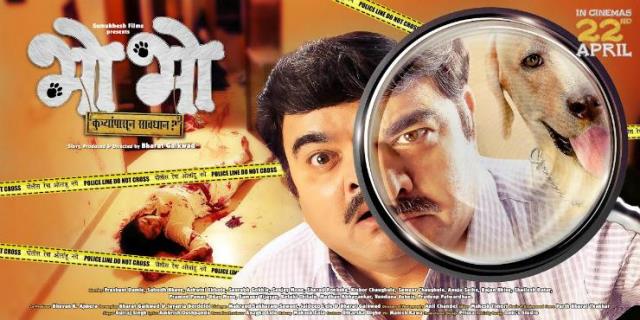 This Week in M Town we have a solo release in the form of Bho Bho. The film is produced by Bharat Gaikward and it is produced under the banner of Sumukhesh Films and it is directed and written one by the man called Bharat Gaikwad. The film has Prashant Damle, Ashwini Ekbote, Subodh Bhave and Anuja Sathe in the lead stars, while it has Saurabh Gokhale, Sanjay Mone, Ketaki Chitale, Sharad Ponskshe, Sameer Vijayan, Pramod Pawar, Kishore Chougule and Pradeep Patwardhan in the supporting role. The film is a mystery, which revolves the subject of a dog killing his owner. The film has the music from Parth Bharat Thakkar, while the photography is carried out by Anil Chandel. Now, time to dig in deep into the film to get the main elements as under:

Vyankatesh Bhonde is an ex-cop played by Prashant Damle who is known for detecting cyber-crimes. One find day, he suffers a tragedy in his life, wherein he loses his young daughter in one of unfortunate accidents by auto- rickshaw. Soon he loses his interest in this job and simply starts feeding the street dogs in the evening hours as it was liked a lot her deceased dogs. He is then hired by a competitive detective agent called Sanjay Mone to find some cases and this is the way Bhonde is seen earning for his living. But, his wife played by Ashwini Ekbote is certainly not pleased with his lifestyle. One day he gets a case from an insurance company wherein the company has to pay 1 crore policy money to a man whose wife is killed by their dog called Sandy. When Bhonde gets the case, he investigates to find the dog normal enough to kill anyone so who kills the lady and what happens at the end is interesting to explore.

Admittedly, the idea is not bad at all, it’s the details, which prove out to be problematic. Unlike the inconsistency found in the portrayal of a mad dog, there are a number of areas in screenplay wherein the logic is seen getting compromised. For instance, why would Vyankatesh would even think of asking something very irrelevant questions to Vinayak in their first meeting. Or why would Vinayak ever think of giving his Tablet to a detective who doesn’t trust him. Also, the chain of logics the detective is seen following when it comes go guessing the murder. There are many issues that simply go unanswered and there the mystery starts to feel conveniently plotted.

Also, the choice of Damle in the role of a detective is not convincing as he remains away from the usual detectives of the silver screen who have their unusual habit of cracking jokes while investigating any case. Though Damle is a man with good comic timing, however, this character seems to be very much different from his profile. His style of humor is completely different than what is required here. You can find him overburdened with too many dialogues that he hardly get any time to even breath. Interestingly, Damle is much better in the serious roles when he is seen in the personal life than the comical routine he has.

Now talking about the film Bho Bho, it soon becomes very much predictable especially when we talk about the mysteries even when you find the same into character types. If you have read detective novels and gone through such series you would realize how detectives play their roles in carrying out their investigation for any case. Also, when one is surrounded with so many excellent suspense in TV, books and movies, why the hell would anyone hatch a simple murder plan? Talking about the performances Prashant Damle is a good actor but somehow failed to get into the shoes of the character of Bhonde, while others like Subodh Bhave, Sanjay Mobe, Saurabh Gokhale, Ketaki Chitale and Rajan Bhise seemed giving an okay performances. The other elements like music, direction, screenplay and editing things remain okay. Thus some way or the other, these helped the film to get some moolah in terms of making entertainment value rich.

Today one can find lots of interesting subjects being roped in to make films in M Town. And Bho Bho can be called to fall in the same category but somewhere is seen losing edge with the flaw in direction and other elements. With a unique concept, re-working and reviewing the scripts once again could have helped the director to embark with much witty and smart kind of scripts that others failed to give you. Yet the film deserves a decent rating at the end.