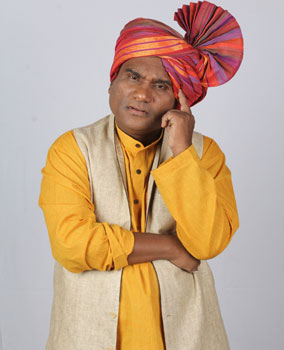 Born as Bhalchandra Kadam on 12th June 1972 in Mumbai, acting has been in his blood since his young age. He is a known face in Marathi Cinema and theatre apart from being a comedian and carved his niche in acting in a number of commercial Marathi films and drama. He was born and brought up in Mumbai and had his schooling from Dnyaneshwar School in Wadala. After his father’s demise the responsibility of earning fell on his shoulder. He is also known as Bhau and started his career in acting in 1991 when he landed into theatre. Soon after doing a number of plays, he got the offer from Marathi TV serials thus got the chance to enjoy his passion in small screen.

Soon become the household name in small screen Marathi serials. Some of his skits including the Marathi standup comedy TV show on Zee Marathi called Fu Bai Fu wherein he also played the main character of Nilesh Sable and comedy shows like Chala Hawa Yeh Dya also aired over the same channel. He also played the character of Pappa in it. He then worked in another show called Tuza Maza Jamena and was seen participating in almost all the Zee Marathi awards that showed by performing his skits.

He was the part of a number of Marathi movies including Timepass 2, Timepass, Miss Match, Sanngto Alka, Pune Via Bihar, Kokanastha Chaandi and Balkadu to name a few. The latter was among his successful films in M Town wherein he was seen in the lead role. He also was present in a B Town film called Ferrari Ki Saawari. As far as his personal life is concerned, he is married to Mamata Kadam and has three daughters including Samruddi, Sanchiti and Mrunmayee.