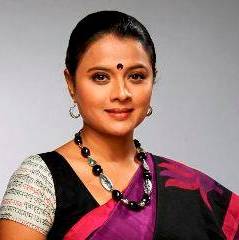 Bhargavi Chirmule is a known name in M Town apart from Marathi TV. She was born on 29th March 1978 in Mumbai and was brought up in this place. She lived in Girgaon and then moved to Dadar while her schooling went at Raja Shivaji Vidayala and later went to Ruparel College in Mumbai for her graduation. Meanwhile she also learnt classical dance which is a dance form of Bharat Natyam. Apart from an actor, she is also a yoga therapist while her younger sister Chaitrali is also an actress. Talking about her personal life, she married twice but was unfortunate to have failed marriage.

Since she was keen in acting so started small working with plays and drama while she was doing her graduation in Ruparel College, however, her first movie break commenced with the film Visha Vinayak. In the year 2010, she got the chance to work veterans in Marathi cinema like Sachin Pilgaonkar, Ashok Saraf and Mahesh Kothare in the movie called Ideachi Kalpana. Her serious roles in the films like Kass got all rounds of applauds for her while movies like One Room Kitchen and reality shows like Fu Bai Fu also made her popular among the Marathi circles.

She won the reality show called Eka Peksha Ek aired at Celebrity Parv, which was hosted by Adesh Bandekar apart from joining the drama called Zopi Gelela Jag Zala. Currently she is tied up doing the sitcome called Suvasini which aired at Star Pravah. She is currently playing the character of Queen Sunayna the mother of Sita in the TV show called Siya Ke Ram aired at Star Plus. Some of the Hindi movies in B Town include Sandook in 2015 and Ishq Wala Love in 2014. She was seen in Marathi movie called Sasu Cha Swayamwar as a Special Appearance in 2013.