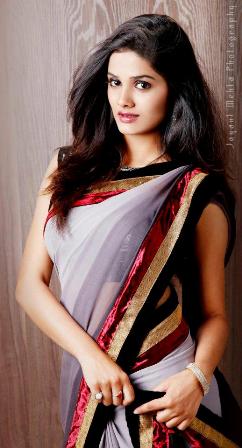 Bhagyashri Mote is no more an unknown actress in M Town. She hails from Pune wherein she was born on 27th September 1994 apart from being raised at this place. She did her schooling from Pune followed by doing her college from Prahaladrai Dalmia Lions College of Commerce and Economics completing his law studies from Pune University. During her college life, she was active in cultural activities apart from being the part of different plays thus helping her to decide about her career in the creative world. So, once she completed her studies, she headed to Mumbai to pursue her dreams of becoming an actress.

She soon got the chance to enter into the small screen working in a TV serial called Devyani, which was aired at Star Pravah. This soon was followed by another TV serial Jodha Akbar and finally the one called Mahadev. While doing a couple of these TV serials, she was spotted by a Marathi filmmaker for the movie called Shodhu Kuthe, which was an average grosser. However, she got a decent exposure for the same getting her more work, which is soon to be announced by her. Talking about her personal life, she is though single but not ready to mingle as she is focusing on her career, which is still in the initial stage.