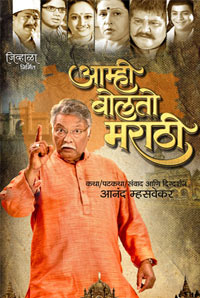 The fans of the celebrated Marathi filmmaker Anand Mhasavekar are eagerly awaiting the release of his forth coming movie Aamhi Bolato Marathi. The film is scheduled to arrive at the theaters on the twelfth of September.

The casting to its lead roles had been made with Vikram Gokhale, Savita Prabhune, Arun Nalavade, Shailesh Datar, Bhakti Desai and Saksham Kulkarni. Apart from directing the movie, the director had played the role of writing the story, the dialogues and the screenplay for the movie. He had also been one of the co producers along with Raja B. Nadar, Swapnil S. Mohit and Sameer S. Mohit. Thus, the film gets the contribution of the director across various capacities. As for its genre, this film has to be categorized as a dramatic one.

The film gets the collaboration of Madhukar Aarkade, , Vijay Gatlewar, Satish Chandra and Shrikant Rajendra as the music directors. The audience can definitely expect some magical and passionate tunes of them rendered by Adarsh Shinde, Rahul Saxena , Sanjay Sawant, Madhuri Karmarkar, Shiv Puran Prod, Vaishali Samant and Vaishali Made. The list of singers implies the movie to be rich in its musical contents.

As heard of the director, while speaking at the press conference, the movie, tough a dramatic one, shall not get lost in between the sub plots coming within. He also claimed that the movie shall be fit and teem, without those typical dramatic bulges hampering its speed. The screenplay had been documented keeping track with the changes in the lifestyle and as such people can easily identify and relate the plot with their life. Tough, the director didn’t revile the plot and said it shall come more interesting if one checks it out post its release.

Apart from the director, the entire unit of the film is confident on the movie to be able to drag the interest and likings of the audience.