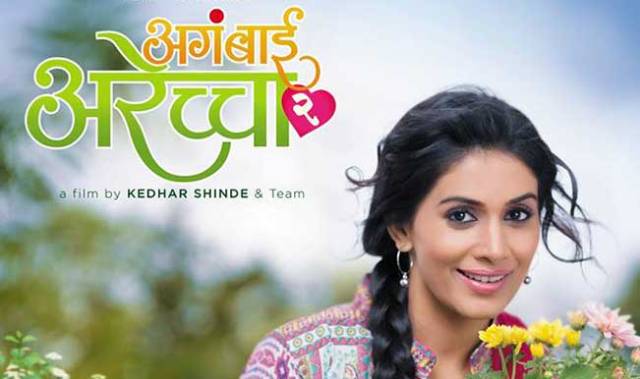 Sonali Kulkarni pulls off a comic act in Aga Bai Arechya 2 which is a so called sequel to the 2004 hit film Aga Bai Arecha ! which was  a laughter riot. Sonali Kulkarni, Dharam Gohil and Surabhi Hande play the lead roles in the film which tries to intermingle thrill, fantasy and comedy. Taking inspiration from the Hollywood film Good Luck Chuck, this story revolves around Shubhangi Kundalkar who is mysteriously convinced that the man she touches will be harmed because that is what has happened in the past every time she got involved with a man. The film has nothing similar to the prequel and is evidently less entertaining than this one. Although the story is fresh but somewhere the performances and the script fail to meet the expectations of the audience.

The chapters in Shubhangi’s life unfold when she discloses her secrets to the writer Vikram Desai, who meets her to interview her. As she traces the incidences of her past life which involved her first love during teenage, the story unfolds and swings between realistic and fantasy. Whether it is a myth or a hex, or some sort of mystery is what the audience is left guessing. The script writer tried to interweave many elements from comedy to fantasy and produce a thrilling story. With few incidences that are meaningless to the story, the audience lose track of the story and gets bored.

Sonali Kulkarni is an accomplished actress with almost all the genres of films, but in this one she struggles to make the audience laugh. Last seen in serious roles, she adapts to the freshness but during the loud sequences, she fails to make the scenes natural and effortless.

Director Kedar Shinde does a decent act of translating the complicated story on screen. Nishad’s music score is good and soothing. Writers Dilip Prabhawalkar and Kedar Shinde have done a fine job. Performances by Dharam Gohil and Surabhi Hande also deserve a thumbs up.

Had a little more thought been put into the story , this would have been a better film. But one need not be a believer in superstitions to enjoy the sequences.

The story simply looks outdated at times. A more intelligent treatment would have done more good. Aga Bai Arechya 2 is entertaining but don’t expect too many laughs. With seasoned actors in the movie, you will definitely not be disappointed with Aga Bai Arechya 2.