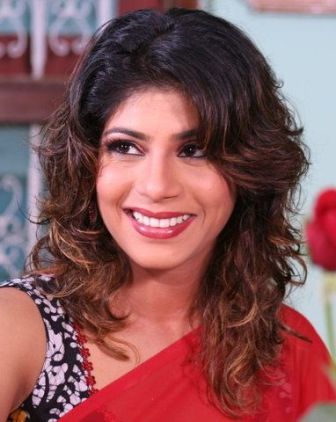 Aditi Sarangdhar is a known Marathi actress, who had worked in a number of Marathi Movies and TV serials. She was born in Bombay on 16th October 1981 in a middle class family. Her father was a doctor called R. Dipak Sarangdhar, while her mom was a house wife and the family came from Kalyan. She has two siblings called Nikita and Amruta. She did her graduation from Ruia College Mumbai. Since her childhood, she was really passionate about cultural activities and particularly acting, which later became the launch pad for her to make her career in this field. She is married to Suhas Revandekar one of her friends in Mumbai.

During one of her stage performances at Kalyan, she was spotted by a filmmaker called Kanchan Adhikari for her incredible talent. She instantly offered her the upcoming film called Damini and later did another Marathi version of All The Best from Bollywood. She then got a TV serial called Vadalvat that was aired at Zee Marathi. Some of her TV series include Laksh, Dholkichya Talavar, Fu Bai Fu, Active Wheel WOW, Abhilasha, Vadalvat, Damini, DD Kathasarita, Bheti Lagi jeeva and Majhe Man Tujhe Jhale.

Some of her recent Marathi movie include Mandali Tumchyasathi Kay Pan, Aakant, Sutradhar, Hou De Jarasa Ushir, Navra Maza Bhavra and Dhating Dhingana, while her movies in her initial years include Tee Ratra, Chingi, Uladhaal, Natha Pure Ata, Divasen Divas and Akalpit. Besides, she has also done a number of plays and dramas, which include Litmus, Manjula, Aga Aga Degree, All The Best, Proposal, Indrakshi and Graceful.