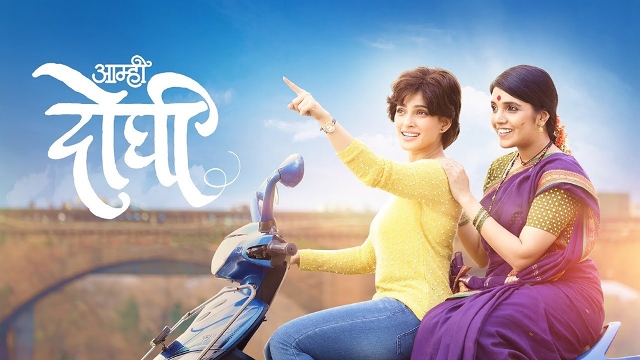 Synopsis :  We know how friendship blossoms in different  relationships. Sometimes we tend to find even best friends come into in a relationship with his or her own fate. The film deals with two women (mother and daughter) who are found each other, in the middle of living their parallel lives are seen having a story of understanding. One can expect the elements like comfort and compassion can be found at such situations but at times one can expect these the least. So, what goes at the end of these two women would be interesting to catch.

The film Aamhi Doghi is basically about the treatment rather than just being the story, which is not to least suggest do about the story of the movie. One can find the exposition of the plot simply following a natural and smooth path and barely is seen deviating ever, which talks a lot about the hard work about the writing and the direction. Interestingly all this comes from a first film director, which is hard to believe. The director despite handling her first movie has showcased a competitive control over handling the complex characters and has diligently approves the diverse emotions.

One may define this film having two female protagonist as a ‘woman-orientated’ film, however, to call the film Aamhi Doghi so is nothing but a travesty. One can find the movie giving loads of importance to human emotions and the audience would find it simple to  connect with it. Now talking about the performances, both the ladies playing different female characters have proved their worth in the film. On the other side, one may find issues with the runtime of the film which make you feel that some sequences are dragged for no reasons hampering the content of the film to some extent. Talking about the technical departments like editing, sound, screenplay and photograph, everything remained par as per the demands of the film.

Usually films dealing with family issues are often notorious but with Aamhi Doghi, things are different, Thanks to the mature way the filmmaker has dealt with the story and showcased before the audience is worth appreciating.