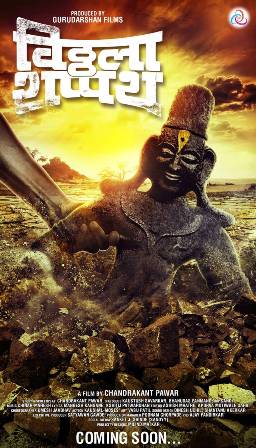 The title of the upcoming Marathi film – Vitthala Shapath of Chandrakant Pawar seems to be mythological though, but the filmmakers claims that the story of the film is far from that. The film is directed and written by ChandrakantPawar, which is produced by Gurudharshan under the banner of Gurudharshan Productions in association with Pahal Productions. The film is all about a story around the life of a strong devotee of a Vitthal and his struggle in the society at large.  The film is far away from any mythological claims and ideas but is purely based on the story governed by science and logic.

The film has the Kruttika Gaikwad, Mangesh Desai, Anuradha Rajadhyaksha, Ketan Pawar, Anshuman Vichare, UdaySabnis, Vidhyadhar Joshi and Sanjay Khapre in the lead and supporting roles. Of late, a number of songs have been released in the media, which is doing well over the chartbusters. The music of the film is being composed by Chinar Mahesh The film is produced by a slew of people including Vinayak Kank, Sukesh Sawardekar, Praful Ajmera, John Nadar and a couple of people like Kutubuddin Dahiwala, MoizBhabrawala and Vakoji Patilas co-producers for the film. The release date of the film is supposed to hit the theatres soon, however, the date is still to be announced, so stay tuned to get the updates of the film.