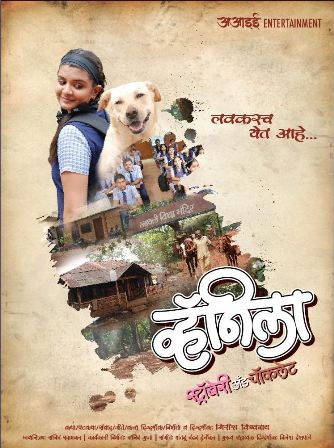 For the film lovers from the 1990s, the Santhosh Sivan directed movie Halo is unforgettable. The movie basically a children’s flick was based on the relationship between an eight years old girl and her pet. The posters of an upcoming Marathi film Vanilla Strawberry and Chocolate also reminds us of this movie. This movie, although with a kido title and attractive posters, is touted as the first Marathi movie to be based on this touching subject of human-pet relationship. Vanilla Strawberry and Chocolate will be hitting the theatres soon.

Vanilla Strawberry and Chocolate is produced and directed by Girish Vishvanath. The director claims the story to be very close to his heart.

The Star Cast of the film includes Janaki Pathak, Ravi Kale, Rajashri Nikam, Radhika Deshpande,  Kshitij Deshpande, VinodJadhav, Pratibha Bhagat and Ashutosh Wadekar. The music of the film is composed by Shantanu Nandan Harlekar and the beautiful lyrics is penned by GirishVishvanath himself. The lead role is played by Janak Pathak who will be seen as a part of the unusual relationship with her pet named Vanilla.

The story of Vanilla, Strawberry and Chocolate is set in the hilly region of Matheran. The entire movie has been shot in this beautiful landscape. The movie promises a treat for the eyes as the cinematographer SachinKhamkar has made the best of the opportunity.

Janak Pathak will be playinga  full-fledged role for the first time. She will be playing the role of a 10thStd girl who finds great friendship in the company of a puppy she cannot live without.