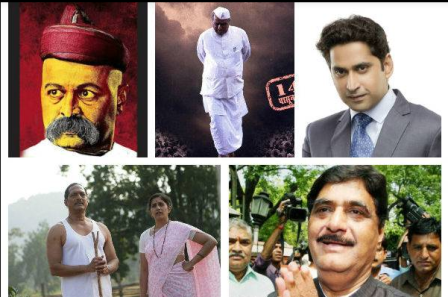 Marathi Biopics are intense, complex and intriguing. Some very life-like biopic save been made in Marathi in recent years. Lets take a look at the most realistic performances in biopics by Marathi actors.

Subodh Bhave’s exemplary performance brings out the hero of Indian Freedom struggle alive on screen. The journey of Bal Gangadhar Tilak from his boyhood to becoming the freedom fighter is essayed from the start to a magnificent level. Both the character and Subhodh’s performance are awe inspiring.

Lokmanya – Ek Yugpurush was a box office success and won the hearts of both audience and critics alike.

Nana Patekar played the social worker Dr. Prakash Baba Amte’s role with the touch of a magician. Sonali Kulkarni played the role of his wife who stands by him through all ups and downs. The struggle of a social worker to get the support of the government and to make his dreams come alive; everything is beautifully depicted in the film.

Dr. Prakash Baba Amte was admired by one and all. Nana Patekar and Sonali Kulkarni’s performances were hailed as par excellence.

Chinmey Mandlekar essayed the role of ex chief minister of Maharashtra, Vasantrao Naik. Political turmoil and highs and lows of personal life are interwoven beautifully by the story. Chimney Mandlekar is powerful and subtle and does his job with great Panache.

Yashwantrao Chavan’s was the first chief minister of Maharashtra and an icon of power and Education. His struggle from his early days and his journey to the pinnacle is recreated on the screen realistically. Actor Ashok Lokhande nails the performance with this genuine acting. Nana Patekar also palyed a key role in this film which attracted good critical review.

This was the name of the first feature film in India. The creation of the film was not a cake walk for Dadasaheb Phalke who went through many ups and downs and faced many challenges to get the task done. Nandu Madhav essayed the role with great skill.  Director Prakash Mokashe received not only appreciation but also many awards. And so did actor Nandu Madhav.

It is one of the most loved biopics in  Marathi.

Bal Gandharva (2011) : To resurrect the character of Narayan Shripad Rajhans , the exemplary actor of Marathi theatre was perhaps the  most difficult role in the career of Subodh Bhave. Bal Gandharva, the most popular actor of Marathi drama on stage did not only play the make roles but also the female roles since female actors were not allowed on stage then. Subhod’s work was captivating as he played the male characters and also the female ones.

Bal Gandharva goes down as one of the best movies in Marathi from make up to performances. The film received five National Awards.