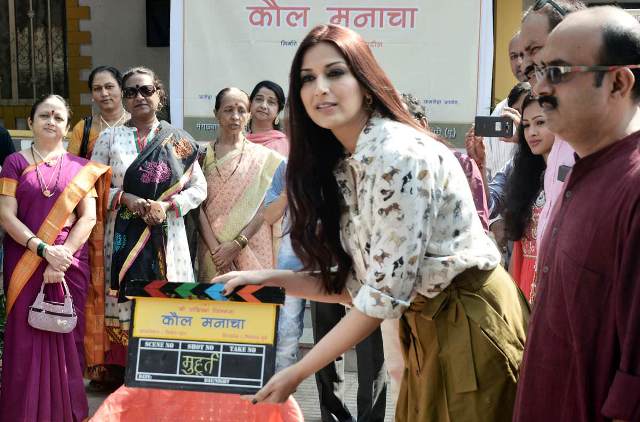 After a long Sonali Bendre is back in news, however, this time she is making headlines for being the part of the Mahurat shoot for the film called Kaul Manacha. This Marathi movie is directed by Heemrao Mude and produced by Rajesh Patil. The former B Town star was present at the Mahurat Shooting in Mumbai. She was present in the show while was seen interacting with the filmmaker of Kaul Manacha.

The film has a slew of stars including Rajesh Shringarpure, Amruta Patki, Sameer Dharmadhikari, Vijay Chavan, Vijay Gokhle, Kamlesh Sawant, Jaywant Wadkar, Shweta Pendse, Mausami Tondwalkar, Varsha Dandale, Vinit Bhonde, Jairaj Nayar and  Abhay Rane etc.The story of the film has been given by Bheemro Mude and Shweta Pendse, while the lyrics have been jotted by Manoj Yadav and the music is given by Rohan. The film will be edited by Nitin Ghag and Santosh Yadav, and the full fledge shooting for the film with start soon.

Previous शाळेतला जोशी “फोटोकॉपी”च्या कॉलेजात
Next Who is Playing the Lead role in Marathi film Shalee?