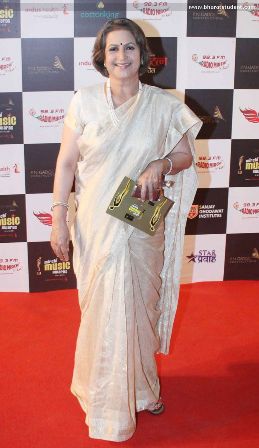 Smita Talwalkar was the most successful producers in Marathi cinema, one who bagged two national awards for her films. She was also one of the prominent figures in television production and a most revered figure in the Marathi cinema fraternity. As an actress, she has played versatile roles, but it was behind the screen that she struck gold. She breathed her last on 6 august at the age of 59. She was suffering from ovarian cancer.

Wiki : Smita Talwalkar Starting her career as a newsreader, Smita took to acting first which was followed by a passion for producing serials and films that were rich in content and high in quality. Her two films Kalat Nakalat which came in 1989 and Tu Tithe Mee in 1998 fetched her the prestigious  National Awards for best films. In the later, Smita has herself played a crucial role. In the year 1993, Smita donned the director’s hat for a film produced by herself. It was the film titled Sawat Mazhi Ladki. The film went on to win the best film in Maharashtra state awards. In many of the films produced by her she played important roles . For example in the year 1991, came Dilip Prabhavalkar starrer Chaukat Raja in which he played the role of a disabled boy . Smita who produced the film played the sister of the boy. The film proved to be a mile stone in Marathi cinema and Dilip Prabhavalkar bagged the best actor award at Maharashtra film awards in the yaer 1992. Chaukhat Raja was directed by Sanjay Surkar with whom Smita has paired up as producer director to bring out many successful films.

Before her demise, the last film in which she acted was Prem Mhanje Prem Mhanje Prem Asta which was directed by the actress turned director Mrinal Dev Kulkarni. The film, though not a big success, was an intricately created story of delicate relations and bonds in which Smita had played an important part amidst the long star cast.

Smita was a familiar face even on the television. She was a part of many popular television shows as an actress and also as a producer. Un Paus, Peshwa and Avantika are few of such serials.

Smita is a recipient of V Shantaram award for her immense contribution to the field of Marathi cinema and entertainment. She was honored with the award in the year 2011. Both her daughter in laws are actresses in Marathi cinema and serials namely Sulekha Talwalkar and Purnima Talwalkar. Her son is the owner of the Talwalkar fitness chain in the country.

Previous Why Riteish Deshmukh chose Lai Bhari for his debut in Marathi cinema?
Next Siddarth Jadhav