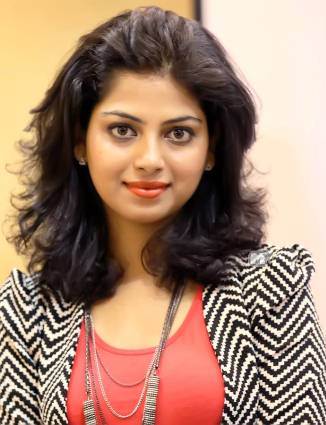 Smita Shewale is a known face in Marathi Cinema, who hails from Pune, Maharashtra. She was born and brought in Pune on 21st December 1986. She did her schooling and college from Pune itself and since her childhood has been active in social and cultural activities, which turned the become the launch pad for her to enter into the creative industry. In order to pursue her dreams, she headed to Mumbai the city of dreams. With a brief struggle, she got the chance to work in Marathi films, which gave her the opportunity to carve her niche into Marathi cinema.

In her debut Marathi movie, she played the character of Swati Desai, which released in the year 2006. Her next film was Chal Lavkar in the year 2009, which she got after a gap of three years. Since then she kept on getting good number of movies and some of these include Laadi Gaodi, Manya Sajjana, One Room Kitchen, Ya Gol Gol Dabyatla, Dum Asel Tar, Power, etc. While her recent movies include Dhamdhoom and Ekta Ek Power, her upcoming movie is Athang, which is supposed to hit the theatres soon. Apart from the films, she is also seen active in small screens.

She has acted in a number of Marathi TV serials and seen in different TV shows. Her debut in small screen started with Zee Marathi TV serial known as Savitri. Some of her Marathi daily soaps include Kalay Tasmai Namaha, Char Chaughi, Indra Dhanu, Mandala Don Ghadicha Daav and Shrimant Peshwa Bajirao Mastani. Besides, she also performed at different events, which include the Zee Marathi Awards in 2008. As far as her personal life is concerned, she is married and settled with her long time friend Rahul in a traditional Maharashtrian wedding at Mumbai.