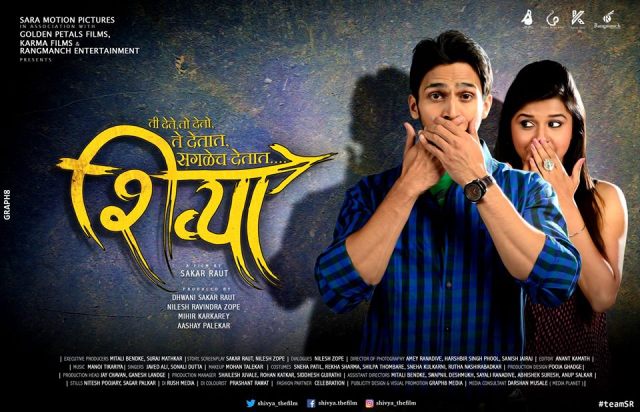 The protagonist in the film called Raghav (Bhushan Pradhan) is a hot-headed youngster who is ready to blurt out abuses at the drop of a hat. However, this habit gets him into an argument with his girlfriend Sharwari’s (Sanskruti Balgude) father and all hell breaks loose. Meanwhile, Sharwari’s family finds her a groom, Vikrant (Piyush Ranade), who happens to be Raghav’s nemesis. The only way out for Raghav is to give up the abuses and rescue Shawari from the villainous Vikrant.

With this film the director has his own thinking. Sakar Raut, the director of ‘Shivya’, feels ‘everybody abuses’. Not that there’s any comparison between the two (House is far better, obviously), but why else would someone use ‘Ti dete, to deto, saglech detat…. Shivya!’ as a key title for his film, the film comes true to its name wherein loads of cuss words have been used in the movie that obviously makes the movie to be the ‘A’ certification one. Though there’s no harm in using a cuss word in a film when there’s a need for it, but here, abusive language is used just for the heck of it. It gets so freaking annoying that you can’t help but pity the actors mouthing the words. Yes, Shivya has a good thought at heart. It brings to focus how abusive language can land you in trouble and turn your life upside-down. But all that after giving a crash-course in cuss words.

The film Shivya Movie Review could’ve worked as a love-story anyway but by including the cuss words, the director Rauthas not only added an unnecessary angle to it but at the same time has even restricted his viewer base. Both the lead stars -Bhushan and Sanskruti though seemed to have a good chemistry as a result of their pairings before. Piyush as the villain is convincing. Well, as we know how cinema often inspires viewers and Shivya is certainly not an exception; it also inspires you to use its title to describe the viewing experience.